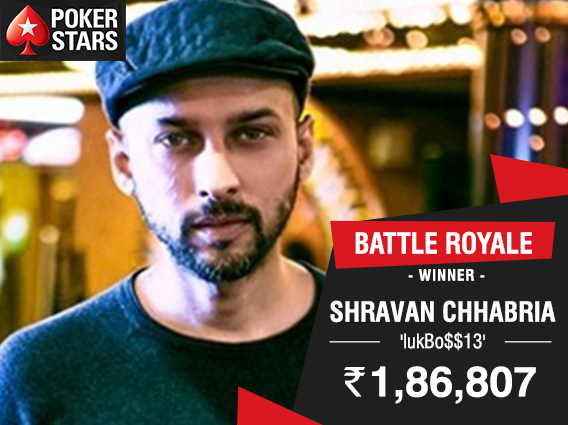 
It was a successful Monday on PokerStars India as it hosted the feature tournament Battle Royale 6-Max INR 10 Lakhs GTD PKO and attracted a sizeable turnout of 212 entries (including 101 re-entries) for a mid-ranged buy-in of INR 4,400. The emerging field consisted of top pros of the community which in turn ensured a competitive grind.

He grinded the tournament since 8 pm yesterday evening till 2.46 am today morning, which must’ve been a tiring one for him. Chhabria needs no introduction but for the sake of new entrants to the scene, here’s what he accomplished in his long career. On virtual felts, he recently shipped Millions in February this year, one of Adda52’s biggest weekly offerings. He recently bagged an SSS title on Spartan too.

On live felts, Chhabria has over $100k total earnings. His best live score earning of $32,130 came in 2016 at the world’s top poker destination Las Vegas in the 47th WSOP Main Event (328th). He is a great live player too and even cashed in the 2019 APT Kickoff, where Abhinav Iyer earned his best live cash shipping the Main Event.

Chhabria is one of those players who need no bankroll addition to continue playing poker, but this win is a sizeable one and will obviously prove helpful in coming days for signing up for more such tournaments on various platforms in India.

PokerStars India has upped its game since the time it set its foot in India in April 2018. Recently, they signed Nawazuddin Siddiqui as their brand ambassador and including him in TV ads. This was even praised by their peers and their competitors in the industry for paving the way for mainstream TV advertising.

Coming to the tournament yesterday, it paid out the top 41 places for a min-cash of INR 4,381. Those included Gaurav Sood aka ‘3betPanda’ (3rd), Madhav Gupta aka ‘madzoopa’ (7th), Srihari Bang aka ‘bangbang1999’ (19th), PokerStars India Pro Muskan Sethi aka ‘Muskan Sethi’ (20th), Ashish Ahuja aka ‘Spewushhhiiiii’ (26th), Sagar Choudhury aka ‘sagarpupull’ (34th), and others.

Keep reading GutshotMagazine.com for more such tournament updates, round-ups, and for general poker news from around the world.