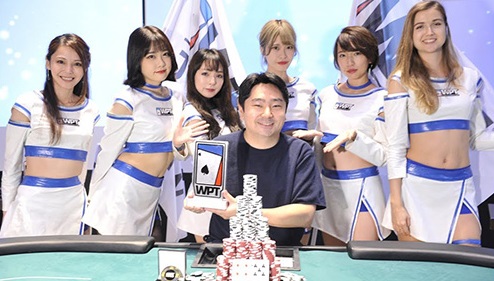 
There’s currently a lot of excitement among Asian poker players as the World Poker Tour (WPT) has scheduled an ‘Asia Swing’ for the latter part of the year. This includes stops at Japan, Vietnam, India and Korea beginning with the 2018 WPT Japan festival which began earlier this month.

The WPT Japan Main Event was scheduled between 15-17 September and hundreds of entries registered to this tournament at the Bane Bagus Shibuya, Tokyo. The tournament had a JPY 31,000 (~INR 20,100) buy-in and it attracted a field of 322 entries in the second edition of the WPT Japan.

Last year, Eiji Kimura beat 460 competitors in the inaugural event and this time, it was Shingo Endo who took away top honours, beating the field to take home $13,000 worth of WPT Passport Credits, which can be used to register into any WPT global events until December 2019.

The festivities at WPT Japan included a total of 6 tournaments and the series has come to an end in Tokyo with the Main Event. Endo walked away as the biggest winner of the series and you must be wondering why he received WPT Passport Credits and not cash prizes.

This is because cash prizes are ‘forbidden’ in Japan, the winners end up receiving packages and credits like in this case. The player was excited with the victory and will be looking to try his luck in bigger tournaments as well. He said, “I have never played overseas so I would like to go to Vegas and try my best. I hope the journey continues.”

The next stop of the ‘Asia Swing’ is the WPT Korea at Paradise City which is scheduled between 21-24 September 2018. We’re expecting a large Indian contingent in that series and this time, players will walk away with cash prizes. Keep reading GutshotMagazine.com for more updates on World Poker Tour events.