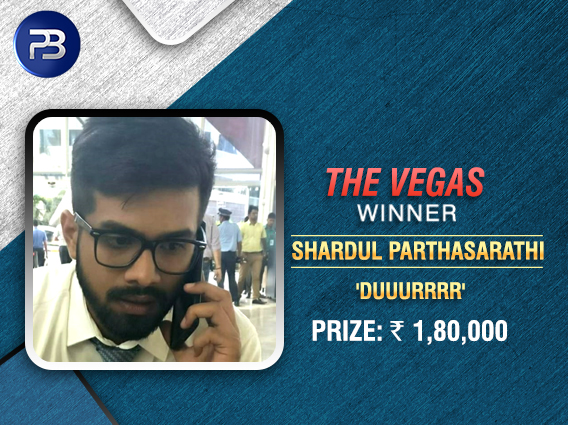 
Gutshot usually scrolls through some of the biggest daily online poker tournaments across every major platform, and we’ve noticed this name ‘duuurrrr’ quite a few times on PokerBaazi featured tournaments. We often wondered who this player was, having reached the money in a few major tournaments.

However, we don’t need to wonder anymore as this player shipped a featured tournament last night and we were able to get in touch with him after his victory. Shardul Parthasarathi is the name behind ‘duuurrrr’ and this is an up and coming player who shipped The Vegas INR 10 lakh GTD last night on PokerBaazi.

The tournament has a buy-in of INR 3,300 and it takes place every Wednesday night at 8pm, with several top Indian players always among the mix, trying to take away a big chunk of that massive prize pool. Yesterday’s tournament saw a grind of over 6 hours and 34 players being paid out, from which Parthasarathi was the biggest beneficiary.

He outlasted a large field but one that didn’t have a lot of pros finishing in the money. He was very handsomely rewarded for this effort, taking away a prize of INR 1,80,000 for first place. He beat ‘sneval’ in heads-up, who collected INR 1,32,500 for finishing second and these two were the only players to take home 6-figure scores on the night.

Gutshot caught up with Parthasarathi after this win. The 26-year old is an Electronics and Instrumentation engineer from VIT, Vellore. He learnt poker in college but didn’t really pursue it further, which he regrets the most now. The player then got back to playing tournaments around a year back and is now looking pretty good.

Based in Mumbai, Parthasarathi told us that he usually plays his poker on PokerDangal, where playing PLO helped him boost his bankroll massively. Now, he’s ready for the bigger tournaments where he takes on the better players around the country and in yesterday’s case, beats these players.

He spoke about the tournament experience, saying, “It’s always a great feeling winning this tournament as I had shipped the 5 lakh and took 3rd place in the 20 lakh warm-up, but never really cashed big money in The Vegas. The field was pretty soft is what I felt. There were a couple of good players with decent stacks, but I managed to stay away from them.”

On a parting note, he also told us about his short-term poker plans, saying, “I’m going to take a break for a few days before I head to play WPT India in Goa next week.” You can keep reading GutshotMagazine.com for similar reports on tournament victories from across the country.