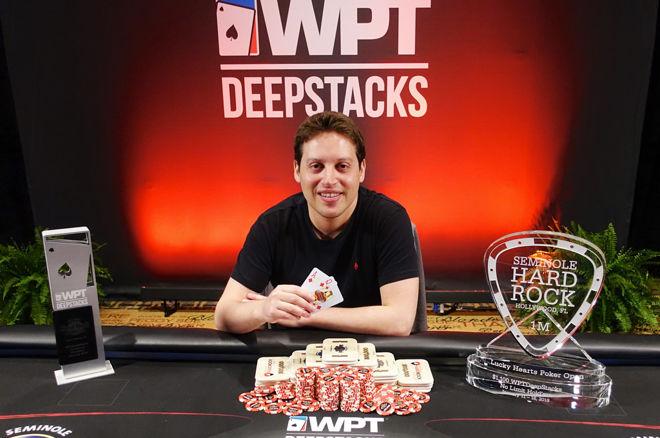 
The World Poker Tour (WPT) DeepStacks Hollywood Main Event took place between 11th and 16th January 2018, at the Seminole Hard Rock Hotel & Casino, Hollywood. This is one of the more famous WPTDS stops and the tournament series had a guaranteed prizepool of over $1 million.

The main event was a $1,100 buy-in, which was ultimately won by Scott Baumstein, who bagged $223,238 for the top prize. Baumstein fought a field of 1,366 entries before finishing as the winner and securing his first WPTDeepStacks title. “I feel good, I’m just glad it’s over. It was a long day, I ran well, and that’s what you have to do to win poker tournaments,” said Baumstein to WPT after the win.”

Apart from the $223,238 in prize money which became his career best live cash, Baumstein also wins a $3,000 WPTDeepStacks Championship prize package. This was his first win of 2018 and he has now taken his career live poker earnings to $1,833,668.

The toughest challenge came in heads up, where Baumstein faced Lumni Zhuta. In the final hand, Zhuta went all-in pre-flop holding 6-3 and Baumstein called it, holding A-Q. The cards opened K-9-5-9-5, giving both players no further assistance and giving Baumstein the win with A-high. He became the champion of Season 5 of WPTDeepStacks Hollywood.

For all updates on similar poker wins around the world, keep following GutshotMagazine.com!