Sarala Kicks Pot Away From Gupta 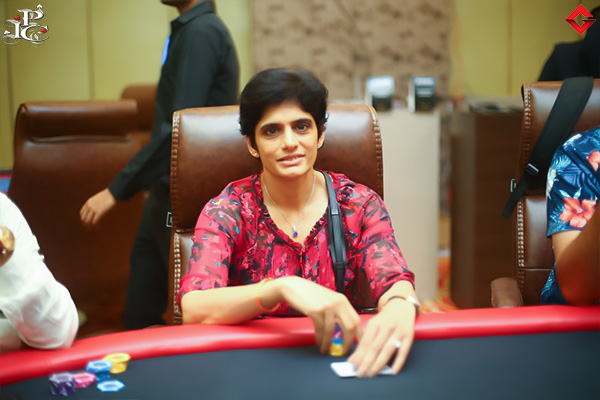 What happens when two players get an Ace on the flop? Well, in the case of Sarala Ramakrishnan versus Hari Om Gupta, it means that one has to go all-in to take the pot. With A ❤ 3 ❤ , the preflop action saw Gupta bet 1,500 and Ramakrishnan raised 6,300 with A ♠ K ♣ while the rest on the table called. The flop A ♦ 4 ♣ 8 ♣ gave both players an Ace-pair. Ramakrishnan bet 5,600 on the flop to which Gupta raised 25,000 prompting Ramakrishnan to go all-in for 35,300 and showdown commenced. While the turn and river gave Q ♦ and 6 ♠ respectively, it did not make a difference for either of the players and Ramakrishnan collected the massive pot with her K ♣ kicker. With only a three as a kicker, Gupta could have pot controlled better.