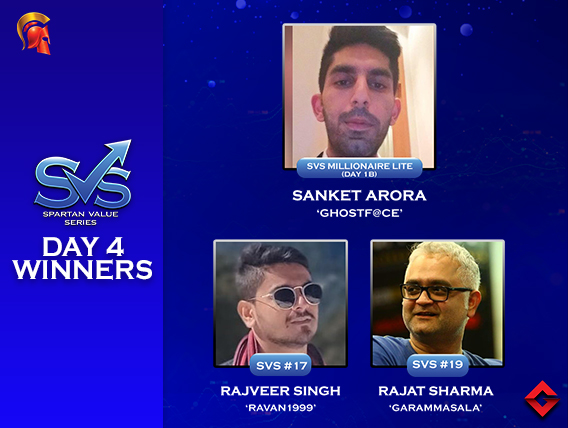 
The Spartan Value Series (SVS) INR 50+ Lakhs GTD is nearing its end! Yesterday lined up another set of 5 tournaments including Hi-Fi being the biggest event of the night on Spartan Poker. Besides the five events taking place, the main attraction is, of course, The Millionaire Lite which concluded Day 1B! So, let’s take a quick look at SVS Day 4…

The first tournament came with the lowest buy-in of INR 110 and 291 entrants took to their seats. This number was enough to collect a bigger prize pool of INR 29,100 which was shared among the top 23 places with each one ensured a min-cash of INR 471. The first title of SVS Day 4 belonged to ‘Sonudon’ who remained undefeated after showing his full house 999QQ to eliminate ‘k himura’ in the runner-up position.

The second tournament of the day saw the buy-in step a little higher to become INR 275, attracting a total number of 156 entries. Only a smaller chunk of 15 finishers ended in the money for a min-cash of INR 810. It was Rajveer Singh aka ‘Ravan1999’ who came out on top after the players settled for a 3-way deal which saw ‘Chkluck’ in the second position and ‘headsupguy’ in the third place.

As the day progressed, the third event attracted 122 entrants who chipped in INR 385, individually. The top 13 places were assured a min-cash of INR 1,025. In level 24 of the tournament, the players struck a heads-up deal which saw ‘BigKus’ claiming the first-place prize money and ‘baazigar9’ settling in the runner-up position.

A prominent name in the industry, Rajat Sharma aka ‘Garammasala’ outlasted a field of 212 entries to take down the 4th tournament of SVS Day 4. Sharma dominated Kunal Sharma aka ‘cvc’ in heads-up with his trip threes to bag the title and the winner’s prize money. Eventually, the top 17 finishers were paid out a share from the prize pool but Rajat Sharma took home the largest chunk!

Hi-Fi is a regular tournament hosted at the end of each SVS day on Spartan Poker, always attracting a good field and this time 322 runners registered after each paid INR 1,650. Walking away with the enormous prize money was an anonymous player ‘bhkh100’ who defeated ‘sher66’ in heads-up with his two pairs of KK88 against his opponent’s KK.

For a buy-in of INR 1,650, Day 1B of the main attraction of the ongoing SVS series drew 662 hopefuls. After hours of battling in the field, Sanket Arora aka ‘GHOSTF@CE’ possessed the largest stack of 1.94 million followed by ‘zapdos311’ with 1.84 million advancing to Day 2. Players still stand a chance to enter the tournament as Day 1C is scheduled to take place today, 23 February at 4 pm.

For more updates on online and live poker tournaments around the world, stay tuned to GutshotMagazine.com.