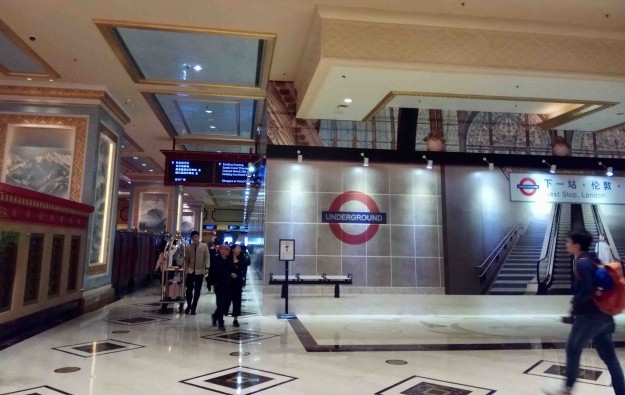 
The famous Sands Cotai Central resort complex located in the bustling gambling hotspot of Macau has begun renovations in order to rebrand itself to ‘The Londoner Macau’. A senior executive of Sands China Ltd. confirmed the news to an Asian news outlet GGRAsia a couple of days ago on Tuesday, 12th March.

The renovations have already started taking place and visitors to the resort can see hoardings on the ground floor of the Sands Cotai Central. The hoardings consist of the iconic London Underground Tube’s red-circle logo with a sign in English and Chinese saying, ‘Next Stop, London.’

Wilfred Wong, president and Chief Operating Officer of Sands China, while speaking at a charity event taking place next door to the Cotai Central in Parisian Macao, pointed to the renovations taking place across and said, “That is for the conversion of… The Londoner Macao hotel.”

Wong said that the hoardings at Sands Cotai Central were specifically related to the Holiday Inn Macao tower that sits in the resort complex at the end of the building. However, he did not specify whether that part of the hotel is closed or not to the general public.

Sheldon Adelson, Chairman and Chief Executive of Las Vegas Sands Corp., parent company of Sands China spoke in October last year regarding the fourth-quarter results of the company in 2018 saying, “We remain confident in the future opportunity in Macau and are progressing with our investments in the Four Seasons Tower Suites Macao, St. Regis Tower Suites Macao and The Londoner Macao.”

Addressing some concerns over the rejig causing disruptions in the company, Goldstein further added, “Yes, there’ll be some disruption. We recognise that. Perhaps that EBITDA [earnings before interest, taxation, depreciation and amortisation] will transfer along those gaming assets to other properties in the portfolio and limit that disruption. But in the end, if you’re a long-term thinker, you want to make money for long-term, this is a game changer for us.”

Sanford C. Bernstein, an analyst firm based out of US, put out a report based on an analysis of the Macau gaming market recently and had said, “Redevelopment of Sands Cotai Central and upgrades at the Parisian will help boost its high margin Premium Mass business. The long-term (beginning in 2020) growth story from hotel suite capacity expansion and the Londoner redevelopment is evident.”

Macau had recently allowed Melco to add new mass market gaming tables. Macau has also seen a 14% surge in 2018 Gross Gaming Revenue (GGR) which is uplifting news for the Macanese gaming industry. Keep reading GutshotMagazine.com for more similar news and for general gambling/gaming news from around the world.