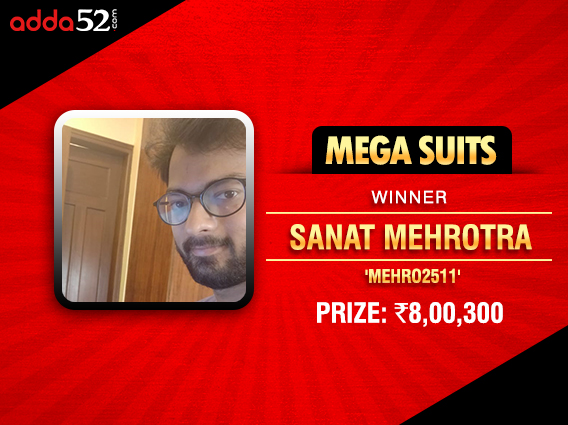 The Mega Suits is another popular tournament and the last edition of this tournaments was hosted a couple of nights back, as a part of their Sunday grind tournaments. It took place along with the Adda52 Millions where Akshay Nasa emerged victorious and took away the massive top prize of INR 6 lakh.

However, the Mega Suits was a bigger tournament on the night, with a buy-in of INR 5,500 and a massive prize pool that crossed INR 30 lakh. What began at 5pm on Sunday evening eventually ended at 2:16am the next morning, after a good long grind of over 9 hours.

Gutshot caught up with the winner to ask him about the tournament experience. He said, “I’m primarily a cash player, but Mega Suits is my biggest single cash till date. Got the ticket through a satellite, played slightly loose-aggressive in the beginning before tightening up in the middle stages. I got lucky as I didn’t suffer any major bad beat throughout. A couple of big bluffs, thin value betting and a KK over QQ gave me a big stack right at the end, which was crucial. Going ahead, will continue playing cash on Adda52 and in Goa along with a few occasional tournaments.”