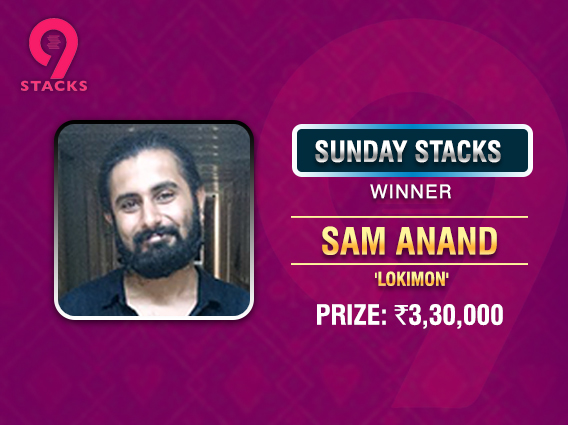 
There is no such word as ‘stopping’ in Sam Anand’s dictionary. After winning the 9stacks’ Tuesday Stacks a couple weeks ago, he went on to win the Tuesday Stacks again the following week and a couple days ago on Sunday, he won the biggest 9stacks tournament in a week – Sunday Stacks INR 15 Lakhs GTD.

The latter had to settle for INR 2,10,000 for his runner-up finish. Anand will also be looking to make a hat-trick tonight by winning the Tuesday Stacks again. He is a well-known community player and has shipped many titles previously, all from well-established platforms. He even shipped Spartan Big Daddy back in July 2018, for a package trip to Goa.

With the back-to-back Tuesday Stacks wins on 9stacks and this significant Sunday Stacks win, the player has added some big cashes in a short period of time and will be hoping to convert it into a few bigger wins along his way, as the year progresses.

The tournament on Sunday saw top 27 places being paid and there were a few regs in the mix too. Neel Joshi aka ‘Worm33’ finished 11th in the money for INR 3,750. Rubin Labroo was also playing and finished just before Joshi at 12th for INR 30k. Adda52 Millions winner Sahil Mahboobani aka ‘ImHighIshove’ finished 16th for INR 22.5k.