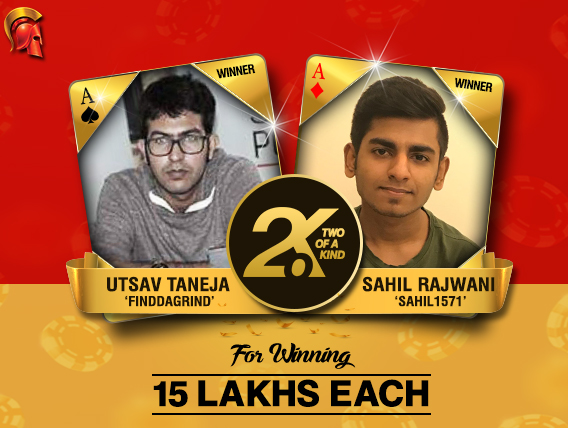 
It was a big night yesterday where poker players came together to play in large numbers, in one of the biggest tournaments in the online poker circuit – the Two of a Kind tournament hosted by The Spartan Poker. The very first Sunday of the month is dedicated to Two of a Kind (2.o.K) (RE) with a buy-in of INR 5,500 guaranteeing INR 15 lakh each to 1st and 2nd place.

The tournament had many satellites running on a daily basis and also many promotion codes to get a free entry into the tournament, along with depositors freerolls running on Saturdays. It is one of Spartan’s signature tournaments, which doesn’t make a differentiation between the first and second place finishers.

The 2.o.K. October edition saw Sahil Rajwani and Utsav Taneja emerging as winners for the two massive prizes of INR 15 lakh each. After an eleven-and-a-half-hour grind (6pm to 5:35am the next morning), these two players made it to the top, outlasting a massive field of 1,026 entries. These entries made a prize pool of INR 51,30,000 which was distributed to the top 70 places with a min-cash of INR 9,234.

Rajwani plays under the name ‘Sahil1571’ while Taneja plays under ‘FindDaGrind’ on Spartan. These guys both fired just one bullet each and would’ve been delighted looking at their return on investment in this mega tournament. They got through a packed field with many top pros but played a Final Table with not too many known names.

We caught up with both of Sahil Rajwani and Utsav Taneja to get to know these players better and do an in-depth interview with both, regarding their poker experience and the 2oK October tournament itself. Keep reading GutshotMagazine.com for these interviews and more updates from the world of poker.