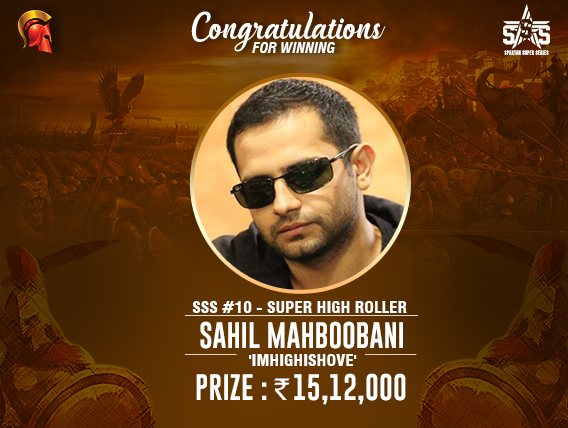 
The Spartan Super Series (SSS) is always a much awaited event on The Spartan Poker. After a successful Day 1 on 13th Feb, yesterday saw SSS Day 2 go in the books. The biggest tournament scheduled for the day was also the third biggest one in the series, SSS #10 Super High Roller INR 45 Lakhs GTD.

The tournament began yesterday at 9 pm and was concluded after a tough action that lasted till 3.42 am today morning on Spartan. The enormous INR 55k buy-in ensured the cream of the crop filling the field of 108 entries (including 26 re-entries and 15 re-buys). The guarantee was crushed, and the new prize pool created was a staggering INR 54 Lakhs!

The player to grab the lion’s share out of the prize pool and to take home the SHR title yesterday was well-known community entity Sahil Mahboobani aka ‘ImHighIshove’, playing on the FTRpoker platform. The ace player took home INR 15.12 Lakhs as the cash prize, beating another tough opponent in Eka Vedantham aka ‘gettingthere’.

In the final hand of the tournament, Mahboobani had already accumulated a chip lead of almost 4:1 against Vedantham and was looking to deal the final blow. Vedantham shoved his stack with Qd Tc and Mahboobani called with Qs Jc. The board came to 4d Td 7c Ah Kc and Mahboobani made an Ace-high straight, thanks to the King on the river, beating Vedantham’s pair of Tens. Vedantham too earned another a hefty runner-up prize of INR 11.34 Lakhs for his finish.

Mahboobani spoke to Gutshot after his win and said, “This is probably the biggest online win of my poker career and also my first High Roller tournament victory! It feels great to ship this tournament.“

Mahboobani just came from a significant online win this Sunday, winning Adda52 Mega Suits for INR 7.2 Lakhs. The fact that he is a well-established player and packs a lot of skills goes without saying. His online record is pretty impressive and includes feature tournament wins like Adda52 Godfather, Spartan Triple Bubble, PokerBaazi Endeavour, and many more.

Since the buy-in was high, the field was tight and only the top 15 places were paid. Filling 5th place was ‘JasonBourne’ for INR 4,32,000. Even though the player did not win this tournament, he shipped another SSS yesterday and made good runs in others to rank 1st in the SSS leaderboard after Day 2 on Spartan.

Meherzad Munsaf finished 6th for INR 3.24 Lakhs. Goonjan Mall finished 7th for INR 2.7 Lakhs. Varun Gupta finished 8th for INR 1.89 Lakhs. MadOverPoker Pro Zarvan Tumboli finished 10th for INR 81k, having won the first tournament of this series a day before. Other knowns in the money include Siddarth Singhvi at 11th and Ankur Aryan at 14th. Ashish Ahuja, a regular in the circles, just missed the pay-out, bursting the bubble at 16th place.

SSS is not over yet and still has 3 days remaining so stay tuned to GutshotMagazine.com for first updates coming from SSS and for your daily dose of poker news from around the world.

Don’t have an account on FTRpoker? Check out their review page here, and don’t miss out on their bonuses, promotions, and guarantee-smashing tournaments. Sign-up now.