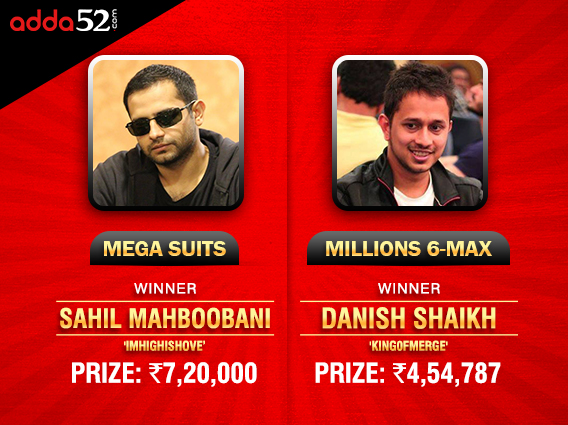 
Sunday is usually a big deal in a typical week of a poker player’s life since every platform hosts big tournaments with huge guarantees on the day, taking advantage of the universal holiday. One of India’s leading platforms, Adda52, also hosted two big tournaments yesterday, Millions 6-Max and Mega Suits.

The tournament was done by 2.14 am today, which started at 5 pm in the evening yesterday. It attracted a total of 511 entries (including 215 re-entries) with a buy-in of INR 5,500. The long haul of over 9 hours finally declared the champion to be none other than Sahil Mahboobani aka ‘ImHighIshove’, taking home INR 7,20,000 as the winner prize, beating ‘sherlocked24’ in heads-up.

The runner-up also bagged a sizeable cash prize of INR 4,20,000 for his 2nd place finish. The champion, Mahboobani, is a well-known entity in the community and has plenty of cashes to his name previously. He had three major title wins in December last year, Adda52 Godfather first, then Spartan Triple Bubble and PokerBaazi Endeavour, making a rainbow finish on all 3 leading sites of the industry. He will look forward to playing and wining more with this awesome cash prize he has secured.

The tournament attracted 205 entries (including 69 re-entries) with a buy-in of INR 11,000. It was a pretty high value affair and had lots of pros in contention many of them playing this as well as the Mega Suits simultaneously. The winner to emerge after a grind of a little over 8 hours (8 pm – 4.09 am) was acclaimed pro Danish Shaikh aka ‘King0fMerge’. He made a deal with tough competitor and well-known regular Akshay Nasa aka ‘vibaks’ in heads-up. Given that both are regular grinders and tough opponents, they did not risk playing and settled for a deal. Both received similar pay-outs. Shaikh earned INR 4,54,787 as 1st place cash prize, slightly higher than Nasa’s INR 4,48,238.

Coming to the champion of the tournament, Shaikh is one of the players in the community who started very early, and has cashes from a lot of tournaments, live and online. Among his significant online wins, he shipped Spartan Elite for INR 8,00,300 and Adda52 One Time for INR 10 Lakhs.

He made his career best live cash back in 2012 at PokerGuru Tour Season 2 Main Event for INR 5.5 Lakhs, which was also his first recorded cash. Later, he went on to finish 5th in 2016 DPT High Roller for another significant cash prize of INR 4,42,000. He is a well accomplished player and the Millions win yesterday would make him slightly richer, given his already brimming bankroll, and he’ll be looking forward to shipping more tournaments this year.

Some knowns who were in the mix and ranked within the 21 paid places were Siddarth Singhvi (6th – INR 88,150) and Pranav Bang (8th – INR 56,375). Keep reading GutshotMagazine.com for more such news from India and for general news from around the world.