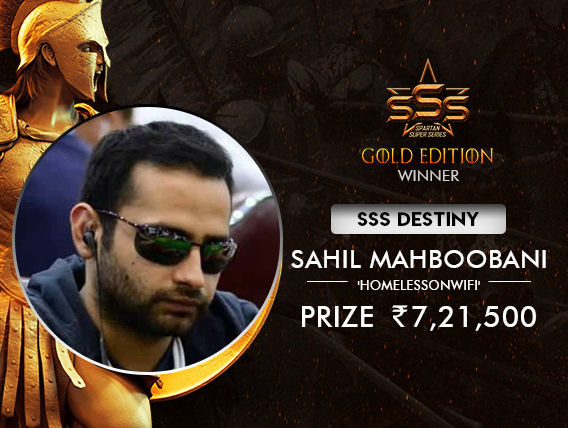 
For the first time ever, Spartan Poker launched a special edition of the Spartan Super Series (SSS) which promises INR 3+ Crore in prizes between 8-12 May. The series is called SSS Gold Edition and is a mashup of the SSS and LBS, which gives a chance to both high-stakes as well as low-stakes tournament players.

Yesterday was Day 1 of the SSS Gold Edition and while quite a few lesser known players won titles, the featured tournament was a star-studded affair. SSS Event #6 Destiny INR 25 Lakh GTD kicked off at 7:30pm last evening with a buy-in of INR 5,500 and as expected, the guarantee was passed as this is an extremely popular weekly offering on Spartan.

This was possible due to the massive field of 555 entries that took the prize pool up to INR 27.75 Lakh. This was distributed among the top 50 positions last night on Spartan Poker, each taking away a minimum of INR 13,875. However, the player who took it down is Sahil Mahboobani aka ‘HomelessOnWiFi’ who had to power through some top pros before he was crowned the champion!

Destiny is in its 9th season at the moment and apart from the massive top prize of INR 7,21,500, Mahboobani also gets a seat into the Destiny 9.0 Finale where 10 players will battle it out in the SnG for a prize pool of INR 10 Lakh. Last night, he beat Ayan Ray aka ‘interalia_1’ in heads-up, a player who won PokerBaazi’s Endeavour in November last year. Yesterday, he was rewarded INR 4.44 Lakh for finishing second in Destiny.

The competition was really stiff and some of the top names who hit the rail before the tournament ended were Aditya Sushant aka ‘SuperuSer’ (9th), Pranjal Gandhi aka ‘lilmessipranjal’ (12th), Vinod Megalmani aka ‘Champ1234’ (13th), Sandeep Varma aka ‘effuno’ (23rd), Sahil Agarwal aka ‘Nasheyy’ (29th), Nadeem Basha aka ‘pokerbill’ (31st), and others.

Mahboobani is one of the top upcoming players in the country and is always among the top ranks when it comes to major online poker tournaments. Earlier this year, he missed out on a Destiny title when he lost to Aditya Sushant in heads-up but this time, he ensured he walked away with top honours.

For all updates on the top live and online poker tournaments in India and around the world, keep following GutshotMagazine.com.