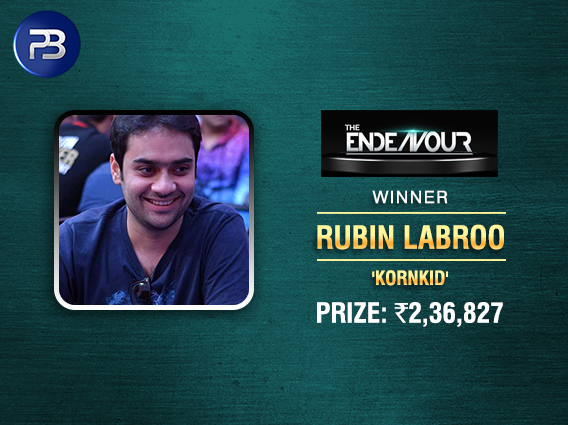 
Rubin Labroo aka ‘kornkid’ is making a habit of winning major online tournaments. He’s making sure he ships at least one major online poker title each week across the various platforms, and you need to be a really good player to make this happen. Last night was another victorious one for the Delhi-based player.

The Endeavour INR 10 lakh GTD is one of PokerBaazi’s most popular tournaments and this one takes place every Tuesday night at 8pm. Labroo registered to this INR 3,850 buy-in tournament and after a few hours of grinding, he added another title to his list of poker achievements.

Labroo looks for the best offerings online and chooses which tournament he should play in wisely. He’s also a regular player in live poker tournaments and is now a force to reckon with in the major tournaments. Last night, he beat a strong field of 347 entries (209 players + 138 re-entries) to win The Endeavour on PokerBaazi, taking away the top prize of INR 2,36,827.

He beat many top players on his way to being crowned champion, including Pramod Gupta aka ‘pg111111’ in heads-up, who had to settle for the runner-up prize of INR 1,76,102. Another top player on the final table was Pranav Bang aka ‘pranav.bang1’ who finished 5th for INR 69,833.

6 hours and 33 minutes is how long it took for the tournament to come to an end, in a tournament where the top 35 players were paid out a minimum prize of INR 12,145. This was because of the guarantee which was broken, and a new prize pool of INR 12,14,500 being generated.

Gutshot congratulated Labroo after this big win and he believed that he ran very good in this tournament. By the looks of it, this won’t be the last time we’ll be reporting a victory for Rubin Labroo aka ‘kornkid’, and you can keep reading GutshotMagazine.com for all updates on such poker tournaments in India.