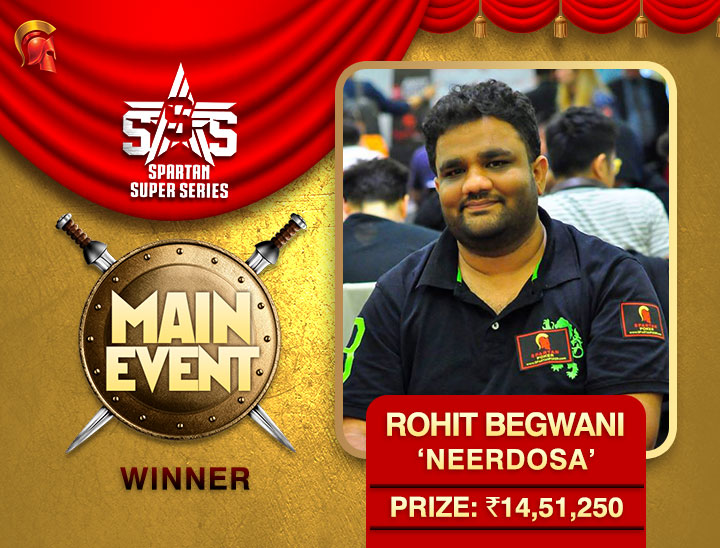 
The recent Spartan Super Series (SSS) on TheSpartanPoker saw a huge number of entries and grand payouts to the players. The five-day series was scheduled with 25 unique tournaments guaranteeing INR 2,50,00,000 with the daily features including Destiny, The Flash, Elite, DareDevil, SuperStack along with high-value tournament like Pot-Limit Omaha HighRoller and the showstopper 75L GTD Main Event.

With these tournaments lined up, SSS also had INR 10 lakhs up for grabs on the leaderboard, with INR 5,00,000 to the top place user which was claimed by none other than Ankur ‘aryan89’ Aryan. He played 28 tournaments, made 7 in the money and came first in two tournaments to make 6,025 leaderboard points. Following him is the tenth Destiny qualifier of the fourth edition Rajesh Kumar Cherukuri who plays under the moniker ‘dvaio’ made 5,162 leaderboard points for INR 2,00,000.

Aryan spoke to us about his leaderboard journey, “It always feels good when you ship any event and, in the process, if you win the leaderboard it’s even better. I had a good series with 2 wins, 2 runner-up positions, 2 3rd positions and 8 FT’s out of 9 ITMs.”

Speaking of plans, he said, “I had no particular plans of chasing tournament leaderboard at the start of the series. However, with a couple of close endings in the first day and shipping one event in the second day, I thought to try for leaderboard as well. I wanted to make sure I have enough points to not let the main event winner take the first prize by shipping just one event. I got a couple of bad beats in two games wherein I finished as a runner-up else it would have been easier. So, last day I was just praying some random guy to win the main event with no earlier points.”

As mentioned above, the showstopper Main Event (RE) with 75L GTD for a buy-in of INR 11,000 saw Rohit ‘NeerDosa’ Begwani as the champion of the tournament claiming the first place prize of INR 14,51,250. This was all about the Main Event and leaderboard, let’s take a quick look at Day 4 and Day 5 events:

The very next event of the day drew 195 entries which was outlasted by ‘Rob_Crawl’ for the first place prize of INR 44,300. The first place finisher defeated ‘lowstake’ in the final round of the tournament where the runner-up took INR 29,900 for the finish.

The featured tournament of the day was DareDevil drew 233 entries, the prizepool collected was distributed to top 20 places with a min-cash of INR 13,400. ‘sur2016’ emerged victorious in this tournament claiming the prize for INR 2,40,000. ‘sur2016’ defeated ‘hoodlincs’ in the heads-up battle where the second place finisher took INR 163,000 for the finish.

158 entries took a part in the last tournament of Day 4 where the prizepool got crushed making it into INR 7,90,000. The prizepool collected was collected by top 17 places with a min-cash of INR 12,403. Destiny winner Pranav ‘mithrandir16’ Anand shipped the tournament for INR 1,98,764. Anand outlasted ‘AbbDangalHoga’ in the final round of the battle where the second place finisher received INR 1,34,300 for the impressive finish.

The Day 5 began at 12 noon with this tournament drawing 227 players in total for the event. The prizepool made was collected by top ‘Kqfish’ who claimed the title for INR 31,725. The first place finisher outlasted ‘Rashmi1997’ in the last round of the tournament for the winning prize of INR 21,360.

The second tournament of the day saw a huge prizepool of INR 4,27,000 which was made by 427 entries in the tournament. Coming on top was the Vegas poker package winner Anirban ‘pokernoob’ Das where he claimed the tile outlasting these huge entries and ‘Esrr’ in the heads-up battle. Das took home INR 90,311 for the first place finish while ‘Esrr’ collected INR 60,805.

336 entries participated in the event to crush the guarantee and generate a prizepool of INR 6,72,000. The prizepool created was distributed to top 31 places with a min-cash of INR 5,193. Ankur ‘aryan89’ Aryan made a first place finish the tournament for INR 1,42,128. Aryan and ‘yashdonk’ were the heads-up players of this tournament where ‘yashdonk’ was eliminated at second place for INR 95,693.

The Main Event of the Spartan Super Series began 4:30 pm on Sunday with 599 entries in total. The whopping INR 75,00,000 was collected by top 31 places with a min-cash of INR 5,914. The champion was none other than Task Master winner Rohit ‘NeerDosa’ Begwani where he grinded for 11 hours and 30 minutes to claim the title of the Main Event and the massive first place prize of INR 14,51,250. Begwani defeated Siddarth ‘PeterPunter’ Singhvi in the last round of the tournament. Singhvi collected INR 9,15,000 for the second place finish.

Gutshot was able to speak to the champion who recently became a father of a daughter and now last night claimed the Main Event title, Rohit Begwani. Here are the excerpts;

Describe your journey through the Main Event.

Initially, I played quite tight and got paid when I picked monsters. Once the bubble period began I opened and started playing ranges vs ranges against good players to re-steal. I think I 3-bet superuser and d trump 7-8 times continuously always making sure I never got out of line, it was strictly range vs range.

When 12 people were left, I had ‘D.Trump04’ on my right and Sumit Sapra on my left. I was constantly 3-betting button open for Trump. Seeing me do this, Sapra started jamming on my 3 bets. So action would be like, ‘D.Trump04’ opens button , I 3-bet SB , Sapra jams in BB. I folded twice but the third time I had Aces and called his 30 Blind jam (He had JK suited) and my Aces held. Busted Sapra and moved to FT with chip lead. After that it was just about patience and re-stealing right with 3 bets / 4 bets.

Any turning points in the tournament where you felt that you could win it.

After busting Sapra and once I moved to FT as CL, I felt I have very good chances of shipping this.

Tell us about your online play. What’s your game mix like? Only cash game or tournaments or both?
I think the phrase ‘Jack of all trades, Master of none’ best describes my gameplay. I play both Cash games and Tournaments in all NL, PLO and OFC. Earlier I would grind a lot at lower stakes, but work keeps me occupied now, I have moved from 10/20 to up to 100/200.I choose either high value tourneys or cash games with more action and sometimes good promotions.

What was the reaction of your friends and family?

Everyone is excited and elated. Some people want me to throw a party ???????? while some want freeroll ????????????. My wife is exuberant, and her support is unparalleled. I had a baby girl just 2 months ago and since then I’ve had an amazing run. I guess she’s extremely lucky for me.

What is your future for the live and online space?

In the last few months I played tourneys less and studied more and discussed difficult spots and hands with Mudit Jain, Abhishek Rathod and whoever else cud help a lot. That has helped a lot and I feel my game is quite solid now. Traveling is my passion – and I want to travel and play a few live series to see where I stand now and then take it from there.

So, you are a Millionaire now, what do you plan to do with this money? I guess Vegas trip is for sure.

Yes, playing wasn’t smooth. I had my friend Mudit and his wife visit us. We were out for dinner and I was playing on my mobile at the cafe with them. My battery died and Mudit gave his mobile and power bank (which is still with me). So, looks like I must get him a new mobile now.

Then in the night constantly my laptop kept crashing. So, I had to keep switching between my mobile and laptop. So, winning despite these hurdles made win even sweeter for me.

The second last tournament of the series saw ‘fuddu’ as the champion claiming the title for INR 4,87,250. The tournament 429 entries in total out of which top 47 places got a share of the prizepool with a min-cash of INR 14,250. 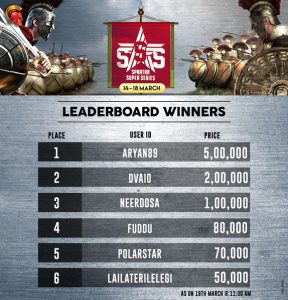 Stay tuned to Gutshot Magazine for more updates on poker news from around the world.