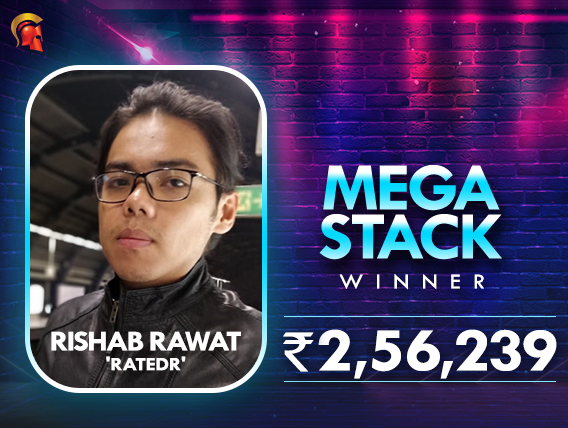 
Tuesdays mean a lot of fun on Spartan Poker as Mega Stack is played out on this day each week. A huge number of entries, both budding players and poker pros come together every Tuesday night and take part in Mega Stack INR 12 Lakh GTD and everyone has a whole lot of fun, while a selected few end up as much richer players too.

This Tuesday, it was upcoming poker player Rishab Rawat who ended up victorious in this tournament, playing as ‘ratedr’ on Spartan. It was never going to be easy as 423 entries signed up from around the country, each contributing INR 3,300 to the prize pool. As usual, the guarantee was surpassed, and the new prize pool of INR 12.78 Lakh was shared among the top 39 places with a min-cash of INR 8,818.

As for Rawat, he wasn’t interested in min cashes and eventually ended up taking home the biggest prize of the night – INR 2,56,239. He beat a number of Spartan Poker regulars including ‘Ravan143’ in heads-up, the latter having to settle for INR 1,70,357 for finishing second, which isn’t a bad prize either.

Gutshot contacted Rawat to congratulate him on this victory and also to ask him about the tournament experience. He said, “I have been working really hard on my tournament game, especially in 3bt and 4bt spots which is really helping me in winning more pots and bigger pots. The tourney was relatively deep stacked, so it helped me as I am a cash game player. However, I’m playing more and more tourneys now.”

He became the chip leader in his first few hands itself, and then managed to maintain it all the way till he was crowned champion. Rawat also won the PokerStars India Sunday Main Event a couple of days prior to this victory and he promised us there are some more victories coming up soon.

For all updates on similar online poker tournaments and other gaming stories from around the world, stay tuned to GutshotMagazine.com.