The nail-biting grand finale of the PUBG Mobile Pro League (PMPL) Season 3 South Asia was hosted yesterday. The final match took place between DRS Gaming from Nepal won the championship and secured 273 points and 115 kills. The tournament favourite Zeus Esports from Mongolia secured the second spot with 271 points and 142 kills while 7Sea secured the third spot with 194 points and 104 kills.

The top nine teams from the leaderboard qualified for the PMPL regional finals which will start on 14 May 2021. DRS Gaming and Zeus Esports will be participating in the regional finals as the PMPL SA Season 2 Champions.

The overall standings of the teams in the PMPL Season 3 South Asia Grand Finals were as follows. 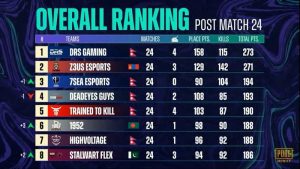 The finals of this tournament took place from 15 – 18 April and the top 16 teams battled it out for a massive prize pool. A total of 24 matches took place in three maps spread over four days. The prize pool for the tournament was USD 1,50,000 which was divided as USD 10,000 for 1st place, USD 6,500 for second place, and USD 5,000 for third place. The top sixteen players were paid and three additional categories were also given prize money.

The League Play Attendance was paid USD 2,500. The Most Valuable Player was paid USD 1,000 and WWCD (Every Match) was paid USD 1,000. The day started with the first match being played on Erangel. The match was claimed by Zeus Esports with 12 kills for its team, DRS Gaming with seven kills, Venom Legends finished with two kills.

Top 9 qualified teams will be looking forward to the PMPL: South Asia regional finals. For more such articles on PUBG and its championships, keep reading GutshotMagazine.com. Follow us on our social handles Facebook, Instagram, and Telegram.