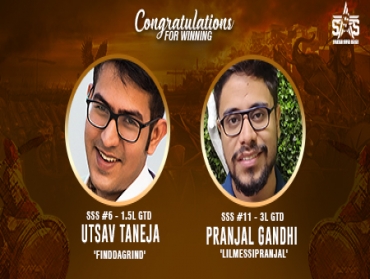 
After some intense poker action witnessed on Day 1 of the Spartan Super Series (SSS), it is time for us to report yesterday, i.e. Day 2’s happenings. The day saw 6 events hosted out of which the Super High Roller and The Flash were the biggest. Here’s a round-up of the remaining 4: 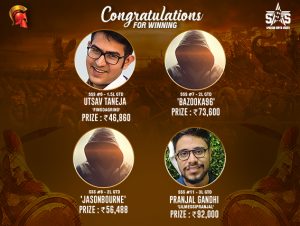 The first tournament to kickstart the day was INR 1.5 Lakhs GTD NLHE, and it attracted a total of 426 entries (including 31 re-entries and 224 re-buys) for INR 550 buy-in. The resulting prize pool came to INR 2,13,000, breaking the original guarantee.

Utsav Taneja aka ‘FindDaGrind’ won the tournament for INR 46,860. He beat ‘Vishalb22’ in heads-up to grab his title and the 1st place cash prize. The runner-up settled for INR 31,737. The final hand saw a pre-flop all-in situation. Taneja was with a huge chip lead and shoved his stack with 9d Td and received the call by his opponent who was packing Ks Th. The board of 2h 4h 9c 8h Tc gave Vishalb22 Tens but gave Taneja an extra pair of Nines to ship the tournament.

Taneja is a well-accomplished circuit player and has seen plenty of title wins and deep runs in his career till now. He won last October’s 2.o.K on Spartan, a huge monthly tournament. He even has the PokerBaazi Endeavour title in his bag, which he won just a month later after the 2.o.K win. He has also bagged the paid Goa trip by winning Spartan’s Big Daddy last November. Taneja currently ranks 2nd in the SSS leaderboard with 1,281 points and will look to play some more in the series and will be hoping to win the elusive leaderboard too.

Beating the field and finishing 1st was ‘Bazooka96’ for INR 73,600. He beat ‘buster’ in heads-up to grab his title. The runner-up settled for INR 49,440 as second place cash prize. The final hand saw the eventual winner with a huge chip lead. He shoved his chip towers with pocket Sixes and received a call from his opponent who had Ks 8s. The board produced Queens on the flop and Bazooka96 shipped the tournament with two pairs.

The third one on the day was also an INR 2 Lakhs GTD NLHE event, following suit of the previous tournament, but with a buy-in of INR 880. The player to overcome the field of 163 unique players was ‘JasonBourne’ who took home INR 56,488 as the 1st place cash prize out of the fresh prize pool of INR 2.45 Lakhs. He was the winner of December SSS HR as well, where he won a massive INR 12 Lakhs.

The winner beat Monish Kumar aka ‘Monish1965’ in heads-up, November 2018 SSS Leaderboard winner. The final hand of the game saw JasonBourne with a massive chip lead and winning was just a matter of time for him. He was with pocket Tens and his opponent with Kh Jh, who went all in pre-flop. The flop itself gave JasonBourne a set of Tens and was enough to beat his opponent’s flopped Jacks. Kumar earned INR 36,945 for his runner-up finish.

This was the last tournament for the day, after the Flash and SHR were hosted, and saw 273 unique players attracted to it, all chipping the INR 1,100 buy-in. The eventual prize pool created was INR 4.6 Lakhs. Top 36 places were paid for a min-cash of INR 2,990.

Pranjal Gandhi aka ‘lilmessipranjal’ shipped this one and concluded the day, earning INR 92k for his efforts. He beat ‘Zadian’ in heads-up to secure his victory. The latter got INR 64.4k as runner-up cash prize.

The final hand again was a pre-flop all-in situation, this time the eventual champion shoved with As Kh, pretty good hole cards. His opponent called with 5c Kc. The board came to 4s 7h 4c Qd 2h, giving Gandhi a pair on the flop and he won the title with the Ace kicker beating his opponent’s only pair of Fours.

Gandhi needs no introduction at all, having a lot of title wins to his name previously. He has won numerous tournaments just on Spartan, like the Mega Stack, Mega Freeze and DareDevil. He has plenty of SSS title wins in the bag too and must’ve had plenty of déjà vu moments while playing in this edition. He also won PokerBaazi Bout last November and has gone on to win many more on other significant platforms. He’ll be looking to embed his already impressive record with a few more titles in upcoming line-up of tournaments.

This concludes Day 2 round-up. Today, the series has 5 events in the line-up and the second biggest of the whole series, The Elite, is also in the mix so stay tuned to GutshotMagazine.com for timely updates on this as well as other general news from across the planet.