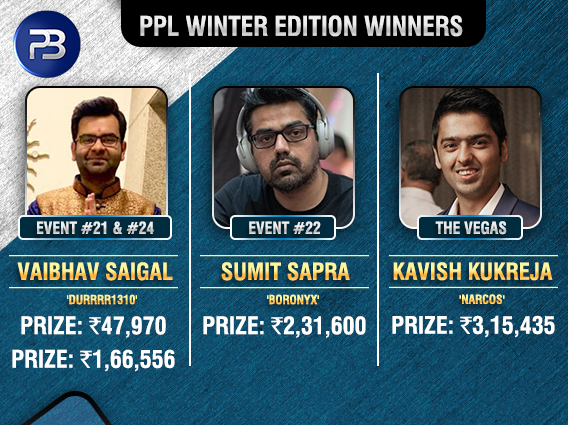 
The PokerBaazi Premier League (PPL) Winter Edition is ongoing at the moment on PokerBaazi and yesterday, Day 5 concluded on their platform with a number of high value tournaments hosted for their users and a number of winners also emerging from these tournaments. A total of four tournaments were scheduled for the day.

From these, Vaibhav Saigal emerged the happiest player, winning two of the four titles and taking his series tally up to three titles. Similarly, Kavish Kukreja won his second title of the series while Sumit Sapra emerged victorious in one tournament for his first title of the series. As for the PPL Winter Leaderboard, Anish Suri aka ‘THENUTS’ is still in the lead, with a decent lead over Saigal who has occupied the #2 position.

To begin the day, a tournament with an INR 550 buy-in and everyone’s preferred 6-Max format was played, where 492 entries joined the competition to take the prize pool up to INR 2.46 lakh and this was later shared among the top 35 players with a min-cash of INR 2,460. Eventually, it was Vaibhav Saigal who shipped the tournament, playing under the screen name ‘durrrr1310’. He bagged INR 47,970 in prize money and this was also his second title of the current SSS series.

The guarantee was raised for the second tournament of the day and here, 386 entries each paid the INR 3,300 buy-in to be a part of the action. Many were hopeful of grabbing the top prize but eventually, it was popular pro Sumit Sapra aka ‘boronyx’ who took away top honours, shipping the tournament for a healthy bankroll addition of INR 2,31,600. The prize pool was upped to INR 11.58 lakh, continuing PokerBaazi’s streak of every PPL guarantee being passed so far, and here, ‘Nutpeddling729’ finished second for INR 1,70,805. Gutshot caught up with Sapra for a comment on his victory and he said, “It was great to come back from down to 3 BB when 2 tables were left to winning it. It reinforces the belief that anything can happen in poker so never lose hope!”

This is one of PokerBaazi’s featured tournaments and yesterday, the guarantee was easily passed as a massive field registered to the tournament with a buy-in of just 1,650, keeping up with the name and providing great value to the winners. The 1,237-entry field took the guarantee past INR 18 lakh and from them, the top 125 players were paid out a min-cash of INR 4,638. Emerging victorious was none other than Kavish Kukreja aka ‘Narcos’ who is a very well-known live and online player. He bagged the top prize of INR 3,15,435 which was reserved for the top player, making this his second title of the ongoing PPL series.

329 entries registered to play in the final tournament of the day, which was a PLO game and the prize pool of this tournament was bumped up to INR 8.22 lakh, beating the guarantee by a long way. Finally, it was Vaibhav Saigal who shipped it and secured his second title of the day, and third overall in this series. What a run he is having! Here, he beat ‘Lalitkahanna’ in heads-up and took away the biggest prize of INR 1,66,556.

Daily tournaments will continue for another couple of days in this edition of the PPL and you can get timely updates of these on GutshotMagazine.com.