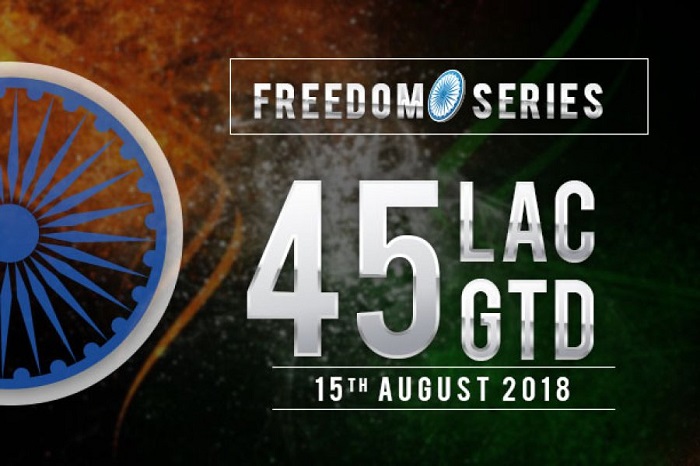 
Tomorrow, 15th August, will be celebrated across the country as our 72nd Independence Day, celebrating the end of the British rule way back in 1947. The top poker companies have scheduled some good promotions and big tournaments on this day as it is a National Holiday in India, meaning more players turning up to play! PokerBaazi is one such company to do something special for this period, launching the ‘Freedom Series’ for the occasion of Independence Day.

The Freedom Series kicks off tomorrow and it consists of two tournaments, with massive guaranteed prizes of INR 45 lakh to be given away. Both tournaments will be played on 15th August and everyone will have a chance to be a part of this massive promotion by PokerBaazi.

The first tournament of the Freedom Series is the Vegas Freedom Special, which has a buy-in of INR 5,500 and a prize pool of INR 40 lakh. Hundreds of players have already registered to this tournament and it kicks off tomorrow at 7pm IST. Players can also get a free ticket to this tournament by deposit a minimum of INR 10k using the deposit code “FREEDOM”.

The second and final tournament of PokerBaazi’s Freedom Series is the Freedom Whoop, which features a buy-in of INR 2,200 and a prize pool of INR 5 lakh. Quite a few players may even be multi-tabling to get the best returns from both these tournament offerings from PokerBaazi.

PokerDangal is hosting an INR 1 lakh Depositor’s Freeroll, while The Spartan Poker also has something for their loyal users, launching the Freedom Deposit Bonanza between 12-15 August. Keep reading GutshotMagazine.com for a timely update on the winners of the Freedom Series and other major Independence Day promotions.