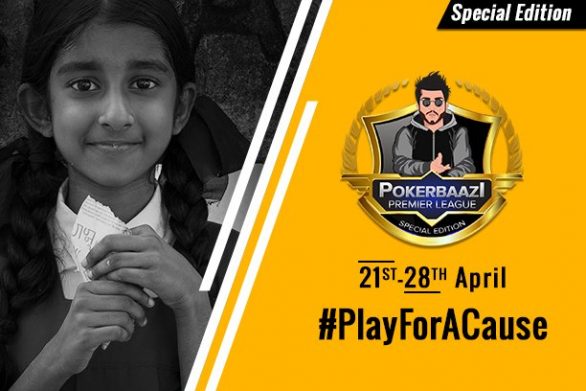 
On International Women’s Day, 8th March 2019, one of the leading poker brands in the country, PokerBaazi, announced a special edition PokerBaazi Premier League (PPL SE) scheduled between 21-28 April 2019. The company made a blog post describing the need for such an event.

PokerBaazi will host the PPL SE in partnership with Vidya Integrated Development for Youth and Adults (VIDYA), a non-governmental organization created for the empowerment and education of less-privileged children and women of society. Part of the proceeds from the PPL SE will be donated by PokerBaazi to fund a year of education of 14 underprivileged girls, with more kids to be sponsored in coming months.

Coming to the series itself, it will be an 8-day online festival which will see over INR 5 Crores being offered in guarantees. The line-up consists of exciting poker tournaments of all major formats with different buy-ins to suit each and every player’s pockets. The players now have an awesome chance to #PlayForACause whereby the more they play, more rake they generate and hence more donations too.

The NGO that PokerBaazi has partnered with, VIDYA, was founded in 1985 by an IIT Delhi alumnus Rashmi Misra. She began with 5 school girls who took tuition from her back in the day in her college campus itself. Gradually, the NGO spread its wings and flew above reaching great heights. It now offers programs in five major cities across India and in some of the poorest neighbourhoods of Delhi, Haryana, Mumbai and Bangalore.

PokerBaazi has done similar CSR activities in the past such as the event in Gurugram this January. The series will be initiated next month and will see top talents and pros from around the country taking part. PokerBaazi recently hosted the enormous INR 2 Crore guaranteed Game Changer tournament and they’ll be hoping that the upcoming PPL SE will also garner a similar good response.

Keep reading GutshotMagazine.com for more similar tournament announcements and general poker news from around the world.