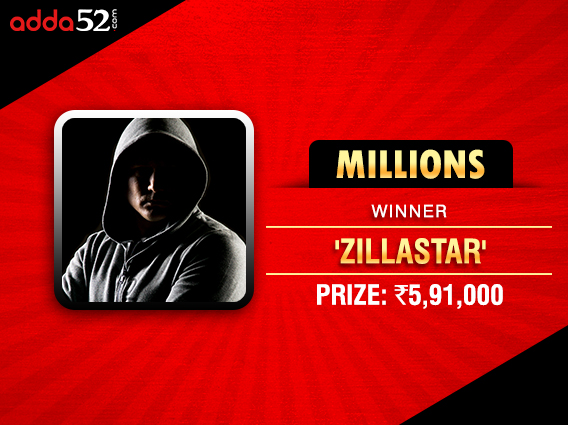 
The Adda52 Millions INR 20 lakh GTD is one of the nation’s highest value online poker tournaments and it takes place on Adda52 each Sunday. Only the best in the business take part in this tournament and you often see the Adda52 Millions final table packed with a whole lot of pros.

This recent Sunday which went by was no different as players coughed up the entry fee of INR 11,000 to participate in the tournament which kicked off at 8pm. One of the specialties of this 6-Max tournament is the offering of 50% TDS refund to all those who finish in the money.

All of the top Indian poker pros aim to win the Adda52 Millions each week, with well-known pros like Akshay Nasa aka ‘vibaks’ winning last week and Sajal Gupta aka ‘sa_jal’ winning prior to that. In the Sunday gone by, it was ‘Zillastar’ who emerged victorious, after having struck a deal with a bigger stack against Pranav Khandalkar aka ‘pkpok’ in heads-up.

‘Zillastar’ happens to be an anonymous player on but he’s doing pretty well, here walking away with a prize of INR 5.91 lakh after winning this signature tournament on Adda52. Khandalkar also greatly profitted from the tournament, taking home INR 4,91,761 after the deal was made.

Gutshot caught with Khandalkar after this runner-up finish. He said, “It was a great feeling getting deep. Was 3-handed with Zarvan (Tumboli) and Shravan (Chhabria) before the final 6 merged for the FT. It was tough but really fun to play with the top pros. On the FT, I picked up a few good hands, but was unlucky against Nasa (Akshay) when he shoved JQ against my AQss and got a double up.”

“However, on the very next hand, I eliminated him with AKss on Ks 10h 7h where we went all-in on the flop. I had top pair top kicker AKhh against K7 off. Got nut flush on the turn. Zillastar managed to eliminate Zarvan and Shravan and had 2:1 chip lead heads up. We then decided to deal and conclude the game.”

Finishing in 3rd place was well known pro Zarvan Tumboli, 4th was Shravan Chhabria aka ‘sweatmyass13’ and 5th was Akshay Nasa aka ‘vibaks’, so it goes to show how tough the competition would’ve been. Until next Sunday, keep reading GutshotMagazine.com for more updates on Indian poker tournaments.