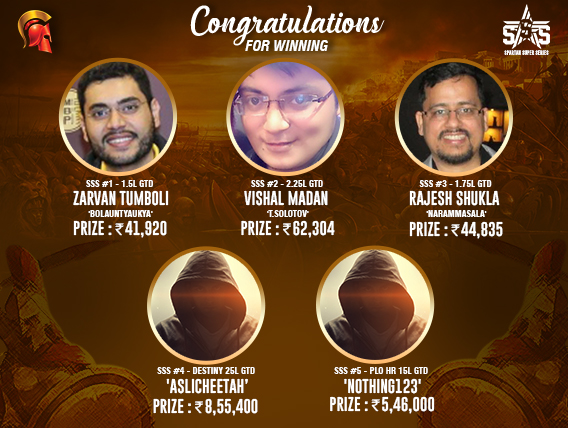 
Spartan Poker’s super exciting monthly series – the Spartan Super Series (SSS) is back and Day 1 went into the books yesterday. The series has a staggering guarantee of INR 3+ Crores and will see top talents across the country competing against each other for the huge cash prizes that are on offer.

Day 1 of the series saw a total of 5 events hosted and the highlights were SSS #4 Destiny INR 25 Lakhs GTD, which is Spartan’s feature tournament of Wednesday and SSS #5 PLO HR INR 15 Lakhs GTD. Here is a round-up of all the 5 tournaments:

This event attracted 261 unique players and a prize pool of INR 2,09,600 was created ultimately. Top 36 players were paid out for a min-cash of INR 1,362. The winner to ship the tournament was Zarvan Tumboli aka ‘BolAuntyAuKya’, taking home INR 41,920 as the 1st place cash prize. The guarantee was crushed and the prize pool created was INR 2,09,600.

Tumboli was pitted against ‘unruhmlich’ in heads-up. The final hand of the tournament saw both with fairly equal stacks. On the flop of As Th 9c, unruhmlich went all-in, making the middle-pair with Td Qc. Tumboli called with Jc Qd, having a gutshot draw. The turn of Ks gave him that and the river of 3h didn’t matter anymore. Tumboli took home the title and unruhmlich had to settle for INR 29,344.

Tumboli, a well-known entity in the community, is also a MadOverPoker Pro and has numerous cashes from previous tournaments, live and online. He won the Ho Chi Minh Cup last September in Vietnam. He also won PokerBaazi SuperStack last November, among others. Established players like Tumboli don’t need a bankroll addition to indulge in poker, but he’ll nonetheless be looking to make good use of this earning in upcoming tournaments.

Tumboli later told us after his win, “I just decided to grind the whole SSS schedule after returning from Goa to chase the leaderboard and give it a shot. I shipped the 1st event on the day which I thought was pretty sweet. I have never chased leaderboards so this is a learning experience for me.“

The 2nd tournament in the SSS was a little higher in guarantee from the previous one. The tournament saw 211 unique players attracted and the resulting prize pool came to INR 2,83,200. Regular online grinder Vishal Madan aka ‘T.Solotov’ shipped the tournament for INR 62,304, beating ‘FindDaGrind’ in heads-up.

The final hand was a pre-flop all-in situation. Madan was with pocket Aces, and the board came to Qd Ah 7s 5s 2d. Madan beat his opponent’s Tc Ks with the flopped set of Aces and shipped the title along with the cash prize. The runner-up had to settle for INR 42,196 as 2nd place cash prize.

We got in touch with Madan after his win and he said, “This is the only time where I wanted heads-up to last longer since the opponent was a good friend of mine, but it got over in 3 hands!” Talking about his overall experience on Spartan he said, “I have been a regular grinder on Spartan. The platform hosts some of the highest value tournaments every day and it’s great to have won an SSS tournament on Day 1 itself. I’m hoping this good run stays alive for future tournaments as well.“

Madan is a well-established player and has shipped a few tournaments previously in his career. He also is an IOPC winner, having won an event in July 2018 IOPC for INR 2,34,270, a significant win. He will be looking forward to an excellent year ahead and will be hoping to convert this to more wins in the future.

The third tournament of the day saw a well-known entity in the community ship it for INR 44,835, overcoming a field of 229 players. Rajesh Shukla aka ‘Narammasala’ won the title and must be feeling quite at home, given that he has many SSS wins in the past and has ranked top in the series leaderboard a record 2 times.

Shukla first won the SSS leaderboard in October last year. He even took down the Cool Leaderboard the following month. Then in December 2018, he again won the SSS leaderboard. Last month, he won the IOPC Triple Bubble in a 5-way deal, earning a cool pay-check of INR 2.158 Lakhs. Shukla is such a consistent player on Spartan that he was even felicitated at the 2018 IPC Awards hosted by the platform in December 2018 in Mumbai.

He’ll be looking to make more deep runs in upcoming in his favourite series. We spoke to Shukla later and he said, “It was a good start on SSS Day 1. I’m looking forward to grinding the whole series and am also hoping to take down the leaderboard again.“

Coming to the final hand of the tournament, he was pitted against ‘BILLIONAIRE’. The hand was interesting as Shukla was packing pocket Nines and his opponent Eights, and the latter shoved pre-flop. The board of Kh 7s 5d 8c 6c gave BILLIONAIRE a set but Shukla one upped him and made a Nine-high straight on the river to ship the title and the cash prize. The runner-up had to settle for INR 31,384 for his finish.

This was the biggest tournament of the day and the feature Spartan tournament of the day too. The prize pool generated ultimately was INR 32,90,000, crushing the INR 25 lakhs guarantee by a huge margin. The total field of 658 entries (including 145 re-entries and 248 re-buys) each coughed up the INR 5.5k buy-in.

The winner to ship the Destiny and who is the 4th entrant in the Destiny 8.0 SnG Finale (scheduled on 3rd April) is ‘aslicheetah’ for the 1st place cash prize of INR 8,55,400, beating ‘EasyMoneySniper77’ in heads-up.

The final hand saw aslicheetah with over 2.5:1 chip lead. The flop of 3d 7h Qd saw him betting 82k and receiving a call from his opponent, both making pairs, but aslicheetah had a diamond flush draw. The turn of 2s didn’t give anything for both but the river of 6d gave aslicheetah his diamond flush, but he played it cool and bet 697k first, luring his opponent to go all-in. EasyMoneySniper77 fell in the trap and saw his Sevens getting crushed by the flush of aslicheetah. The runner-up got INR 5,26,400 as 2nd place cash prize, not a bad one after all.

The last tournament of the day saw the PLO format. The guarantee was crushed, and the new prize pool generated was INR 18.2 Lakhs. A total of 91 entries (including 14 re-entries and 24 re-buys) chipped in the buy-in of INR 22k.

The player to ship the tournament was ‘nothing123’ beating regular Sam Anand aka ‘Lokimon’ in heads-up to secure his 1st place cash prize of INR 5,46,000. Anand ultimately settled for INR 4,55,000, a good cash prize indeed. Anand is having a phenomenal run lately, having won back-to-back Tuesday Stacks wins and some 2nd place finishes.

The last hand of the tournament saw pre-flop all-in again, and the board came to 8h 9c 2d 4d Qh. nothing123 showed a Queen high straight with Ts Ad 9s Jc and beat Anand’s two pair with 2s Ac As 4s. nothing123 swept the table clean and took the title and the cash prize home.

With this, the Day 1 goes into the books. There are still 4 days remaining in the series., so keep reading GutshotMagazine.com for first updates on upcoming SSS tournaments as well as for general poker news from around the world.