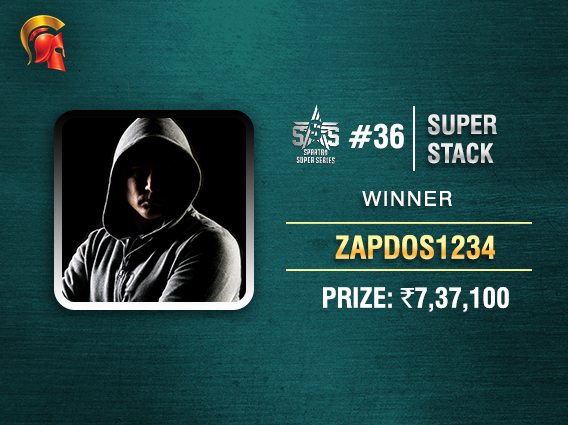 If you are an Indian poker player, then there’s one statement that you will happily agree with – “Sundays are the best!” Players make time on Sundays to sit down and grind for hours as all of the best tournaments and highest value tournaments take place on this weekly holiday.

SSS Event #36 Sunday SuperStack INR 25 Lakh GTD was one of these Sunday grind tournaments scheduled for 7:30pm last evening on The Spartan Poker. This already popular tournament did even better as it was a part of the Spartan Super Series (SSS) which concluded yesterday after a week of exciting competition.

This INR 5,500 buy-in tournament saw a massive field of 567 entries registering and this took the already high guaranteed prize pool even higher – INR 28.35 lakh. This was shared among the top 50 players on the night, with the smallest prize given away being INR 14,175.

While most of the attention would’ve been on the SSS Main Event (shipped by Abhishek Jaiswal), this was still a tough field to get through, with a number of well-known pros finishing in the money. However, the winner isn’t as well-known as these pros. ‘Zapdos1234’ was the champion at the end of the night and this player preferred to stay anonymous after the victory.

Zapdos1234 was the last man standing when the tournament came to an end at 3:20am this morning. He would’ve been mighty pleased with this achievement, as he beat several good players and moreover, took home the massive winner’s pay-check of INR 7,37,100.

In heads-up, he beat ‘karangupta27’ who took home INR 4,53,600 for finishing second as the top five players all won 6-figures scores. The final hand saw karangupta27 shoving all-in pre-flop with Jh Qd, while Zapdos1234 made the call with Ah Tc and the latter won the tournament after the board opened 4h 9s 8h 7h Ac and he hit a pair of Aces on the river. In third place was ‘BlueLays’ who has made several cashes in this edition of the SSS, including winning SSS Event #8 and finishing runner-up in SSS Event #32 yesterday itself.

Keep reading GutshotMagazine.com for more updates on the Spartan Super Series as well as other top Indian poker series and tournaments.