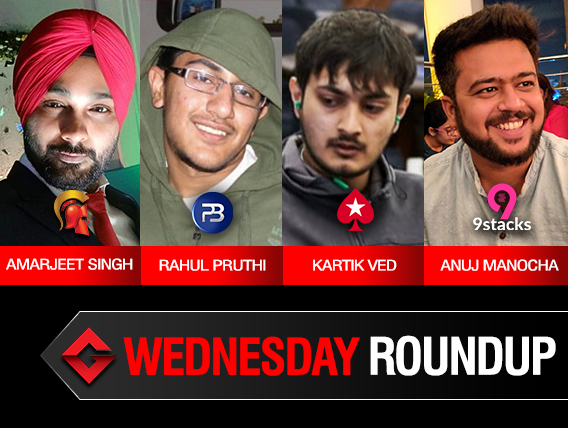 
And here we are halfway through the week and once again the guarantees are escalating. By now, the poker fanatics know all about Wednesday fever that promises huge cash prizes to the top performers. PokerBaazi offers a chance to win a trip to Goa, providing all the expenses also assuring INR 50,000 to the top 2 players who will go towards SnG! So, let’s have a quick look at Wednesday majors…

Spartan Poker’s headline event was Destiny 12.0 INR 35 Lakhs GTD. The series runs 10 weekly tournaments and all the 10 winners take their seats in Destiny SnG Finale to walk out with incredible rewards. Being a part of the weeklong SSS, Destiny enticed a record-breaking field of 668 entries for a buy-in of INR 5,500. Entering the club of winners was Amarjeet Singh aka ‘superchor89’ after a heads-up deal struck between both players. Singh carrying a larger stack of 5.7 million finished in the first place while his opponent ‘sasikiranx’ rested in the second position.

Wednesday night on PokerBaazi was all about G.O.A INR 20 Lakhs GTD.  For a buy-in 5,500, a total of 368 players and the prize pool was later shared among the top 54 places. The last man standing was a circuit regular Rahul Pruthi aka ‘YOUAGAIN’ who beat Rachit Arora aka ‘rachubaba’ for INR 3.7 Lakhs. Arora walked away clutching INR 2.6 Lakhs.

Last night’s Maverick INR 10 Lakhs GTD on Adda52 kicked-off at 8 pm for a buy-in of INR 2,500. Topping a field of 428 entries was an anonymous player ‘rajatnara’ who shipped the tournament for INR 2.48 Lakhs after beating ‘potkiller86’ in heads-up who survived to take home INR 1.5 Lakhs.

The leading player of the country both in live and online felts, Kartik Ved made the most of the healthy prize pool in the PokerStars feature Night on Stars INR 5 Lakhs GTD. Playing under the username ‘TheInternetKid’, Ved fired three bullets to seize INR 1,05,702 in prize money after defeating Vishal Tulsyan aka ‘mdigurgaon’ in heads-up. The runner-up survived to acquire INR 77,479.

StackUp INR 2.5 Lakhs GTD on 9stacks had its routine daily run, registering a field of 175 players with each paying a buy-in of INR 1,650. It was Anuj Manocha aka ‘Desijuari’ winning his second title in the week and pocketing INR 65,000 after defeating Nitin Ranka aka ‘ElMonje’ in heads-up. Ranka walked out with INR 45,000 for ending in the second position.

Other notables to receive a paycheck include Ashish Ahuja aka ‘HakoonahMatata’ (4th), Ashok Choudhary aka ‘Think_Tank’ (12th), Anuj Yadav aka ‘brockLesnar95’ (13th), Kaptan Ali aka ‘Kaptanbhai’ (15th), Ashish Kumar aka ‘AK19’ (18th) and others.