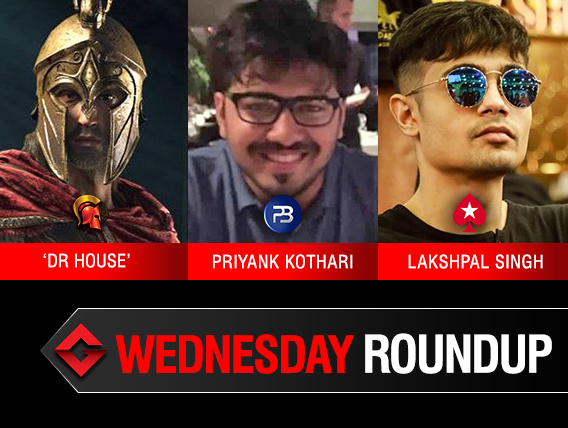 
Every once in a while, the leading online felts of the country comes up with newer designs to fetch the needs of their loyal user base. Even after hitting the mid-week, the thrill couldn’t stop the poker enthusiasts to stay away from the felts. Spartan Poker pounced with the biggest news, the 13th edition of the highly admired Destiny series that began on 15th January to go on until 18 March where the top 3 winners are promised a Las Vegas package. On the other hand, G.O.A. on PokerBaazi also offers a chance to visit the poker capital of the country. And here is the complete summary of Wednesday majors…

Wednesday’s headlining tournament on Spartan Poker was Destiny 13.0 INR 25 Lakhs GTD attracting a total of 703 runners, breaking the last week’s record! These hopefuls who registered themselves for INR 5,500 in the event saw the displayed guarantee being smashed to create a higher prize pool of INR 35.15 Lakhs. Over 8+ hours of intense battling, the tournament was ultimately conquered by ‘Dr House’ after the players struck a heads-up deal and with that, his opponent ‘FreeFlow’ settled in the second position.

PokerBaazi’s G.O.A. INR 20 Lakhs GTD pulled out 455 entries for a buy-in of INR 5,500. The tournament kicked off at 8 pm and the grinding continued for over 8 hours. But before the competition came to a standstill, the top 63 finishers earned quite well for their efforts from a bigger prize pool of INR 22.75 Lakhs. Giving a standout performance was an online reg Priyank Kothari aka ‘Piko1432’ who beat Guneet Kwatra aka ‘guntz’ in heads-up to seize INR 4.15 Lakhs in prize money sending away Kwatra to the runner-up position to settle for INR 3 Lakhs.

An anonymous online grinder ‘rashpr’ took down Wednesday night’s Maverick INR 10 Lakh GTD on Adda52. The tournament registered a field of 493 players for a buy-in of INR 2,500 leading to the creation of a higher prize pool of INR 11.21 Lakhs, well-distributed among the top 49 places. ‘rashpr’ defeated ‘xwink’ in heads-up and pocketed the winner’s amount of INR 2.74 Lakhs. While the latter added INR 1.62 Lakhs in his poker bankroll.

The Wednesday featured tournament on PokerStars Night on Stars INR 10 Lakhs GTD was a part of the Winter Series. The entire event registered 425 players, each one of whom entered after paying INR 2,750 buy-in. After hours of shuffling and eliminations, it was a prominent face in the poker industry Lakshpal Singh aka ‘B00MTilt23’ who secured the title and boosted his poker bankroll, adding INR 1.91 Lakh. Singh railed out ‘Sooo Pure’ in heads-up who finally settled for INR 1.40 Lakh.