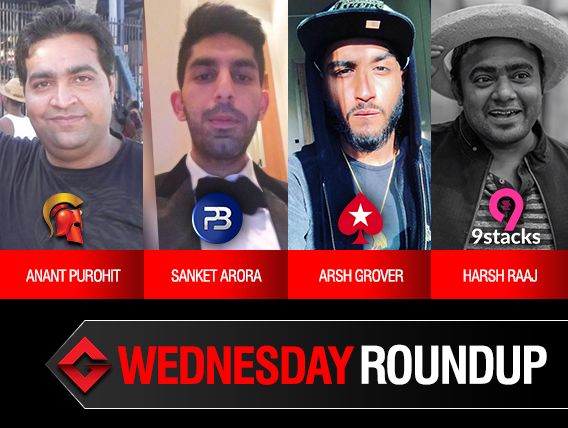 A smashing night across major online platforms in the country showered huge cash prizes to the ultimate winners. Now, Wednesday also means the exciting Las Vegas promotion to the champion of the SnG Destiny Finale on Spartan! It was an incredible night that saw the online felts being lit by the best-known players in the poker industry. Let’s take a quick look at Wednesday majors…

By now, every active player knows about Destiny hosting 10 tournaments in each edition. Last night was another edition of Destiny 12.0 INR 30 Lakhs GTD on Spartan Poker at 8pm sharp. With a buy-in of INR 5,500, it observed a good field and the top finishers being paid out. Yesterday saw another finale occupant, a leading player, Anant Purohit aka ‘Pro’ who powered through the massive field and grabbed the first-place prize money after sending Vikranth Varma aka ‘borntrouble’ to the runner-up position.

Down to the final two in level 46, the final hand got underway between Purohit holding 5h 8c and carrying 6 million chips up against Varma having Qd Ad and 912k chips. The former bet 80k on flop Kc Qh 7h and got a call from the latter. Turn 6 ignited little hope for Purohit betting 105k while Varma calls holding pair of Queens. And what were the odds! With 4c on the river Purohit bets another 684k and the table finds the entire stack of Varma in the middle. That’s when Purohit spins his 4-8 straight railing out his opponent’s single pair to bag the title.

Wednesday night on PokerBaazi was all about G.O.A INR 20 Lakhs GTD, hosted at 8 pm for a buy-in of INR 5,500. It was Sanket Arora aka ‘blackcod’ taking away the limelight for INR 3,80,000 after defeating Anuj Yadav aka ‘brockLesnar95’ in heads-up. INR 2,75,000 was eventually grabbed by the runner-up.

The featured event on Adda52, Maverick INR 10 Lakhs GTD enticed 421 players for a buy-in of INR 2,500. The tournament began in the night and ended at 2:44am this morning, announcing the winner in Moola Udaya aka ‘udaymoola’ who bagged INR 1,78,224 after the players settled for a 3-way deal.

It was Arsh Grover aka ‘BiggggTymeR’, a well-known player in the online poker circuit to grab the Night on Stars INR 5 Lakhs GTD title on PokerStars last night. The buy-in to the tournament was INR 2,200 observing a decent field. The chip graph clearly shows Grover’s lead throughout 6+ hours into the tournament. He pocketed INR 1,01,702 after beating Dinesh Singh aka ‘P$_FI$H’ in heads-up. Singh managed to walk out with INR 75,011.

153 hopefuls entered StackUp INR 2.5 Lakhs GTD on 9stacks for a buy-in of INR 1,650. Taking away the lion’s share from the prize pool and strengthening his bankroll was Harsh Raaj aka ‘littleboy’ beating ‘dhakdhak’ in heads-up. Raaj secured INR 65,000 while the runner-up managed INR 45,000.

Top finishers to receive a paycheck include Jigar Rao aka ‘mysonluck’ (16th), Tuesday’s StackUp winner Satyam Gupta aka ‘noobAf’ (18th), Renu Arora aka ‘babadada’ (19th) and so on. For the latest updates on live and online poker tournaments keep reading GutshotMagazine.com and stay tuned!