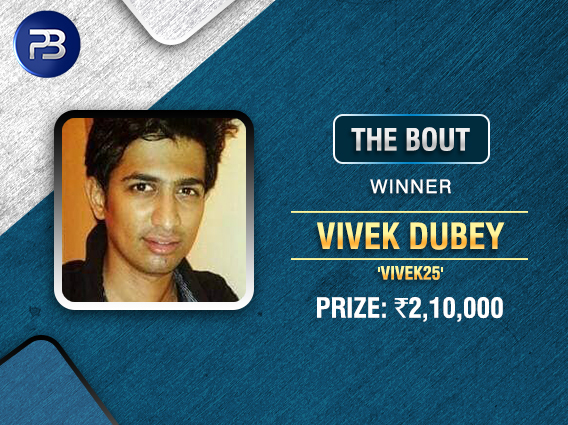 PokerBaazi is one of the biggest online poker websites that regularly hosts feature tournaments every day of the week and hands out huge cash prizes. One such tournament is The Bout, which happens every Monday on PokerBaazi platform.

The Bout has INR 10 Lakhs GTD prize pool and a buy-in of INR 4,400. Yesterday’s event saw a total of 212 entries out of which 89 were re-entries. The Bout started at 8 pm sharp and ended at 2:02 am today morning. Top three players in this event cashed out a 6-figure amount.

Mumbai-based Vivek Dubey aka ‘Vivek25’ emerged as the crowned champion after weathering a gruesome 6-hour storm. Dubey shipped The Bout for a whopping INR 2,10,000. A 6-figure amount like this is surely a significant addition to his bankroll and will enable him to play in more upcoming feature tournaments.

Gutshot got in touch with Dubey after his big win. “It always feels good to ship a tournament,” he reacted, adding “I mostly play on PokerBaazi and have been playing poker since the last 2 years”. He has a couple of wins bagged up already, winning the Summit and SuperStack on PokerBaazi this year itself. With this kind of performance, shipping future tournaments must feel like cakewalk.

Other known names were also in the mix, with Anik Ajmera aka ‘EagleSong’ bagging the runners-up title and taking home INR 1,52,000 cash prize. Ajmera had won the Adda52 Millions for INR 5 Lakhs just last month. Prince Singh aka ‘NaNki’ finished 3rd with INR 1,08,500. Singh did well online this year, winning two events in Spartan’s IOPC which was hosted in July.

Harsh Dembla came in 4th, cashing out INR 85,000. Jasven Saigal was also playing in this tournament and finished 11th. Saigal is one of the veterans in the Indian poker industry, having previously cashed out in many live tournaments as well.