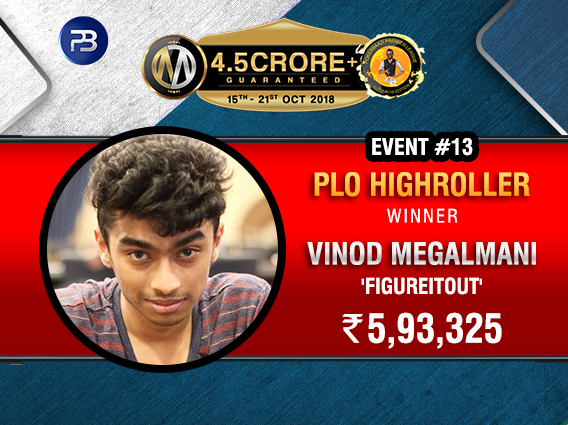 The new system and user interface in PokerBaazi seem to be doing fantastically since its launch in August, with many players providing positive feedback about the same on social media and other platforms. That has had a very good impact on the ongoing PokerBaazi Premier League (PPL) Autumn edition.

The series promises INR 4.5+ crore in guaranteed prizes but it seems like PokerBaazi is going to be giving out much more, with each and every tournament crushing the advertised guarantee thus far. Yesterday was Day 3 of the series and all of yesterday’s five scheduled tournaments saw increased prize pools too.

One of the highlight tournaments of the day and of the series itself was PPL Event #13: INR 25 Lakh GTD PLO HighRoller, which had a steep buy-in of INR 11,000 and the tournament kicked-off at 7pm last evening. Once again, the participation was much better than expected, with 293 entries registering and the prize pool swelling up to INR 29.3 lakh.

From this field, the top 26 were paid out and with such a high buy-in, you know you’re going to find some of the best finishing among the paid spots. Some of these include Kunal Vaswani aka ‘pinguv’ who finished 9th place for INR 65,925. Busting in 8th place was Amar Mehta aka ‘kidpoker0109’ who won INR 80,575 for his only cash of the day, but that was enough for him to maintain his lead at the top of the PPL Leaderboard for a third consecutive day!

Lakshay Grover aka ‘BaazigarIV’ was the next to go, taking away the first 6-figure pay-out for finishing 7th, while ‘kakoji’ followed him in 6th place. Arjun Dhingra aka ‘Mysteryrider’ was the next known player to bust out, finishing 5th for a handsome pay-out of INR 1,90,450, followed by ‘ihavetoletyougo’ who took away INR 2,49,050 for finishing 4th.

The pay jumps from here were massive and ‘beastmode777’ was the next to hit the rails, finishing 3rd for INR 3,36,950, leading to the start of heads-up between Vinod Megalmani aka ‘figureitout’ and Prince SIngh aka ‘NaNki’. The tournament finally ended at 1:58am this morning with Megalmani claiming top honours and the top prize of INR 5,93,325, while Singh settled for the runner-up prize of INR 4,46,825.

For Megalmani, a big win is something he has achieved a few times in the past, winning the SSS Main Event in June and the 2oK tournament in January this year on Spartan. Singh too, has finished runner-up in the PLO HighRoller once before on PokerBaazi. Overall, it was a good night for both players.