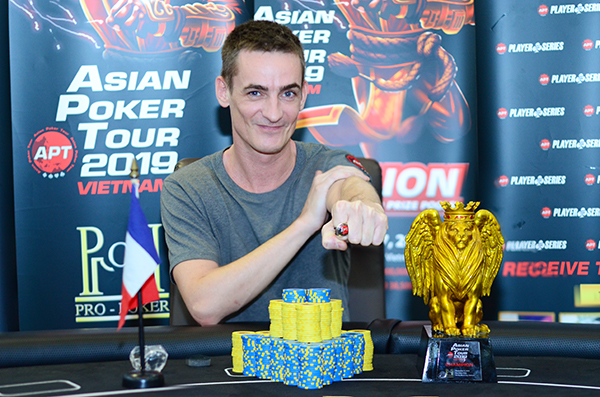 
Putting an end to an incredible 12 day long Asian Poker Tour (APT) Vietnam was a 3-hour prolonged heads-up between Frenchman Vincent Chauve and Japan’s Go Mori at the Championships Event VND 6 billion GTD. A runner-up finish in the recent Main Event with Akshay Nasa, it was now time for Chauve to lift the Championships trophy and title, pocketing healthy prize money and the APT Championship Ring! 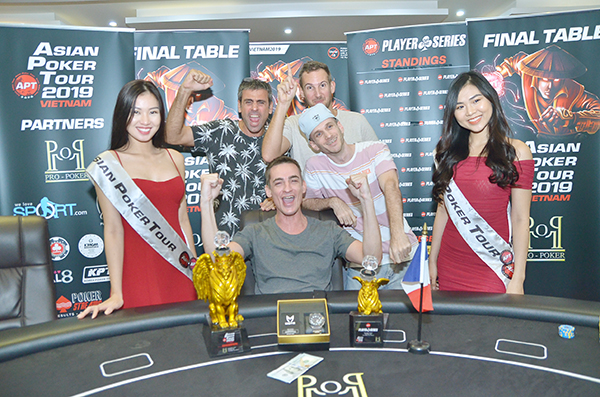 The event attracted a total number of 179 entries for a buy-in of VND 3.8 million each. A prize pool of VND 6.07 Billion was drawn, and the top 18 places received a min-cash of VND 79 million. Indians were engrossed on their live screens watching the nation’s pro Dhaval Mudgal, who finished at a very impressive 3rd place for VND 730 million. (~INR 22 Lakhs).

With Chauve pushing out other remaining players, the heads-up saw a major rise and fall in lead. The Frenchman railed out Kang Feng Lien (6th), Day 3 chip leader Fu Bang Huang (5th), and ultimately faced Go Mori with a 4:1 chip advantage. The final hand of the tournament saw Chauve putting his entire stack of 8.1 million in the middle, with Kc Jh while his opponent Mori with his last 560k chips called for 10d 7s. The board ran 5s 3s 6s 9c 6h, and that’s when Chauve triumphed the competition, pocketing VND 1,576,810,000 in prize money winning with nothing but K-high!

After Nasa’s win, Mudgal entered the final table 2nd in the chip lead which highlighted the fact that he is currently among the top poker pros in India. He is well-remembered for his massive victory in the 2018 WPT Vietnam Main Event at Pro Poker Club, earning a whopping VND 2 billion (~INR 76.63 Lakhs). Vietnam is certainly a happy hunting ground for Mudgal!

The Asian Poker Tour wrapped up with the declaration of the APT Player of the Series winner which also awarded to Vincent Chauve. It was a terrific week for him, witnessing a roller coaster ride along with a spectacular win, earning 1065.83 points on the POS Leaderboard.

APT bestowed him with the APT POS Trophy, POS Ring, an exclusive watch and $800 for his outstanding performance. Korean Jeonggyu Cho in finished 2nd place with 885.70 points and the Main Event champ Akshay Nasa who finished 2nd in High Rollers event, rested at 3rd place in Player of the Series race, receiving POS Trophy and $100.

Marking an end to the APT series, the World Poker Tour (WPT) Cambodia is the next stop for several pros to fly to including a few Indian players. So, keep reading GutshotMagazine.com for the latest updates on poker tournaments around the world.