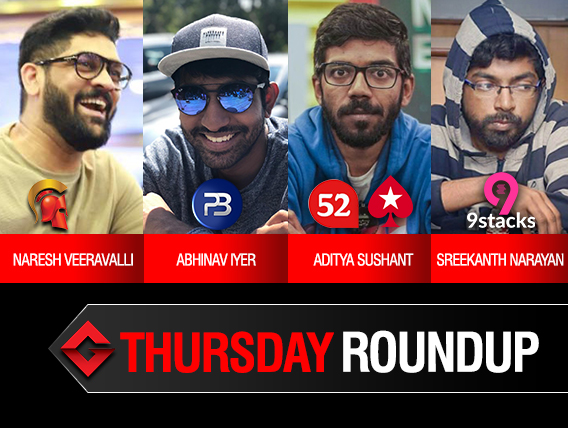 
Last night proved to be phenomenal across the leading online platforms in the country. WSOP bracelet winners and well-respected poker pros Abhinav Iyer and Aditya Sushant took to the online felts and conquered Thursday night, mastering tough fields. Sushant had a brilliant day, having won not one but two majors while chopping the third with fellow bracelet winner and friend, Iyer…

Day 1A kick-started at 6 pm, few hours into the tournament saw 533 players entering for a buy-in of INR 5,500. Amassing the largest stack and claiming the day was online crusher, Harshad Barve aka ‘omglukbox’ with 339,736 chips. The chip leader is closely followed by ‘pokerkara123’ with 260,223 chips.

Spartan Poker is quite famous for hosting Head-Hunter INR 15 Lakhs GTD, a bounty tournament. Players entered for a buy-in of INR 6,600 and the grinding continued for over 5 hours. Before the tournament concluded the top places were paid out a portion from the prize pool. At 1:57 am, winning the lion’s share of the money was Naresh Veeravalli aka ‘FreeFlow’, who added a healthy amount to his bankroll, with a total of 12 bounties.

The Summit INR 15 Lakhs GTD on PokerBaazi saw some tremendous action last night. Two of the leading poker pros of the country Abhinav Iyer aka ‘griezmann’ beat Aditya Sushant aka ‘gangajal’ ended up in heads-up. Friends off the tables, the two decided on an offline chop in the tournament, after which they flipped until Iyer went on to become the official champion. The official payouts were INR 4,68,600 to the winner and INR 3,28,987 to the runner-up.

The astonishing night also smashed the guarantee to create a prize pool of INR 21.2 Lakhs. A share of this was well-received by the top players including Manish Lakhotia aka ‘thekid’ (5th), Guneet Kwatra aka ‘guntz’ (10th), Sagar Choudhury aka ‘sagarpupul’ (18th), Kartik Ved aka ‘TheInternetKid’ (23rd), Siddharth Karia aka ‘schemer’ (25th) and so on.

The action doesn’t end right here! Adda52 hosted Godfather XI INR 20 Lakhs GTD, and here, Aditya Sushant went on to bag another title after already chopping the PokerBaazi title. He ended it by beating ‘bossman_anmol’ in heads-up. The well-known leading pro pocketed a healthy INR 4,51,895. while the runner-up bagged INR 3,98,305.

The online felts were brimming with intense action! Aditya Sushant was the ultimate star of the night once again, triumphing yet another tournament after winning one and chopping one. PokerStars India hosted Highroller INR 12 Lakhs GTD. Sushant plays under ‘serendipity786’ and here, he took home INR 2,68,034, headlining the action on Thursday night. The bracelet winner beat Sreekanth Narayan aka ‘LaganaHiToHai’ in heads-up. The last one-hour into the game saw a massive downfall of the runner-up who stayed above the average stack for over 5 hours and he managed to walk away with INR 1,97,440. What an incredible night it was fo Sushant!

A bigger prize pool was seen to be shared among the top 34 places including Sagar Choudhury aka ‘sagarpupull’ (9th), Arjanveer Chadha aka ‘ballistick310’ (10th), Shagun Jain aka ‘Sogani22’ (11th), Ashish Ahuja aka ‘Spewushhhiiiii’ (20th), Gaurav Sood aka ‘3betPanda’ (30th), Kartik Ved aka ‘TheInternetKid’ (34th) and so on.

While the online poker platform was under rage, 9stacks hosted Thunder INR 5 Lakhs GTD which is usually scheduled for each Thursday. It observes a pretty good number of entries with each one paying INR 4,400 buy-in. Outlasting the field was the runner-up from PokerStars’ Highroller, Sreekanth Narayan aka ‘n0thing’ defeating Ayush Garg aka ‘lazyman’ in heads-up. The online grinder, Narayan displayed on the top, shipped the tournament for INR 1,35,000 in prize money!