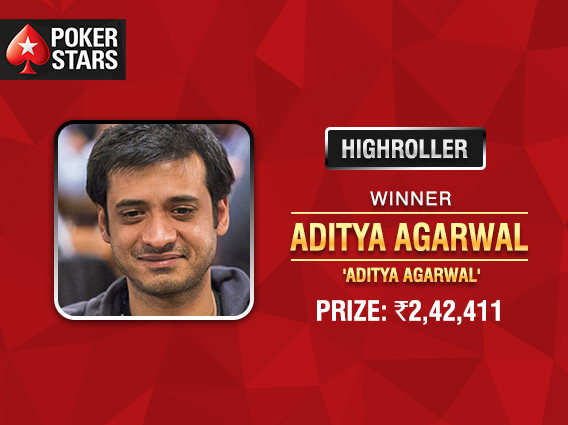 
PokerStars India, operating in the country since April 2018, has been upping their game a lot in the region. They have previously hosted numerous series and tournaments that have gained popularity throughout its time of existence and continue to do so.

Just yesterday, the company unveiled Bollywood sensation Nawazuddin Siddiqui as their brand ambassador in a move that’s sure to gain extra eyeballs for the brand. The brand regulalrly hosts daily feature tournaments like any other platform and yesterday was no different.

One such tournament than was hosted yesterday on PokerStars India was the Highroller INR 12 Lakhs GTD for a buy-in of INR 7,700. Total 167 entries (including 72 re-entries) were registered to the tournament. It began at 8 pm and was in the books by 2.23 am today morning.

Topping this field which consisted of top talents was none other than Aditya Agarwal, who happens to be one of India’s best poker players and is also India’s first ever PokerStars Team Pro. He took home INR 2,42,411 as first-place cash prize last night, beating ‘KLLUST’ in heads-up. You can immediately spot Agarwal’s name on the client, as it has the iconic ‘Red Spade’ beside it, indication of a Team Pro.

Agarwal is a top-notch professional who has been in the community since its inception. He currently sits at 3rd position in India’s All Time Money List with over $1 million in live cashes, some dating back to as far as 2006. He earned his best live cash of $242,211 last year at the APPT Macau Main Event for finishing as runner-up.

He also has multiple cashes from WSOP too and over the years, he has made a name for himself internationally. Agarwal is also a core member of the PokerGuru Staking (formerly AceJack stable) team, and many young and budding players have received invaluable training and guidance from him. Most have gone on to do well on live and online felts.