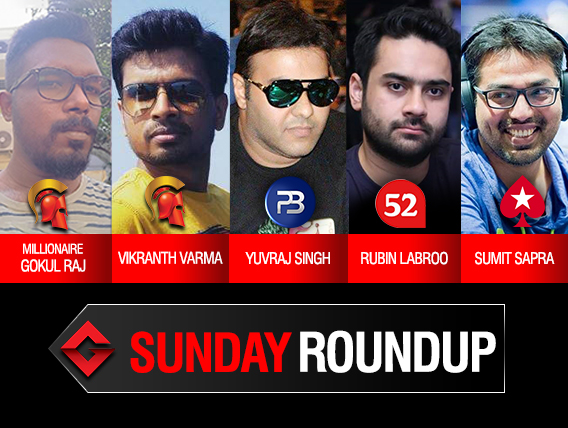 Sunday was jammed with tremendous action both on live as well as online felts! Some of the biggest tournaments reserved for this day when the citizens of the country feel free to enter and win big. It was a glorious night across each online platform, crowing several poker pros battling to reach the highest peaks. And here is a quick summary of all the Sunday majors…

Scheduled between 15-17 November and part of the Spartan Super Series (SSS), the multi-flight SSS Millionaire hosted on Spartan Poker saw starting three flights, Day 1A, 1B and 1C, and the final day. Day 2 kicked off at 9pm last night. The tournament came in with a guarantee of INR 1.5+ Crores drawing a field of 1,588 entries with only 254 advancing to Day 2. It was an intense affair, the grinding continuing for 5 long hours and prior to it, a prize pool of INR 1.58 Crores being distributed among the top players. Yesterday saw the rise of the online crusher and poker pro Gokul Raj aka ‘Super Kings’ who walked out with an enormous sum of prize money after defeating ‘JhingaLala’ in heads-up who settled for the runner-up position.

Sunday SuperStack INR 30 Lakhs GTD was also hosted by Spartan Poker at 8 pm sharp with a buy-in of INR 5,500. This day tends to draw various poker fanatics to showcase their skills and grab the marvelous first-place prize money. The competition continued till 5:42 am until the ultimate winner was announced. Powering through this massive field was Vikranth Varma aka ‘borntrouble’ who defeated ‘MandirYahinBanayenge’ in heads-up.

Each player chipped in a buy-in of INR 2,750 to register in The Monster INR 5 Lakhs GTD on PokerBaazi. It was a well-known face in poker industry Yuvraj Singh aka ‘ThePredator’ playing across online as well as live felts who lifted the title and walked away with INR 1,25,292. Singh beat ‘Goyal0279’ in heads-up, and the runner-up settled for INR 87,915.

Other notables to cash include Ryan Cardoso aka ‘AceFromSpace’ (4th), Sagar Choudhury aka ‘sagarpulpull’ (7th), Shashank Shekhar aka ‘Acekiller’ (20th), Siddharth Chaturvedi aka ‘siddchat’ (26th), Guneet Kwatra aka ‘guntz’ (27th) and others.

Generally, Sundays are reserved for 2 major tournaments on Adda52, and one of them is Big Slick INR 15 Lakhs GTD. The tournament kicked off at 5 pm yesterday, 8+ hours into the competition saw a massive field with each player chipping in INR 2,200 buy-in. The only man standing throughout the tournament was one of India’s best online players Rubin Labroo aka ‘kornkif’ beating another leading player Sahil Mahboobani aka ‘ImHighIshove’ in heads-up. Labroo walked out of the tournament carrying the winner prize of INR 2,70,041 while the runner-up grabbed INR 1,97,940.

Other players receiving a paycheck include Ujjwal Narma aka ‘fourteenk’ (10th), Sumit Sapra aka ‘Hammer_Head’ (12th), Ashish Ahuja aka ‘rocky3705’ (21st), Anil Adiani aka ‘spewtard’ (31st) and others.

PokerStars hosts Sunday Special INR 10 Lakhs GTD reserved for every Sunday. Starting at 8pm, a good field of 200+ entries was observed with a buy-in of INR 3,300. Sitting in 22nd in India’s-All Time money list for live cashes, Sumit Sapra aka ‘mrgr33n33’, another leading player winning across various platforms, excelled in the tournament last night for INR 1,90,112. Even 5 hours into the competition, the winner lied below the average stack but still managed to rise and beat ‘KNOCKMEOUT999’ in heads-up.

Other notable players to receive a paycheck include Shashank Shekhar aka ‘Goldfish097’ (6th), Muskan Sethi aka ‘Muskan Sethi’ (8th), Ram Kakkar aka ‘TheLagLawyer’ (36th) and so on.

An intense 7+ hours into The Joker INR 15 Lakhs GTD on 9stacks announced the winner ‘bounty’ who shot 2 bullets to take away the prize money of INR 3,67,500. The anonymous player topped a field of 203 entries, each paying the INR 5,500 buy-in. The prize pool was shared among the top 37 places receiving a min-cash. The champion of the night defeated Harshit Sanghi aka ‘Harsh114’ who managed to grab INR 2,47,500.