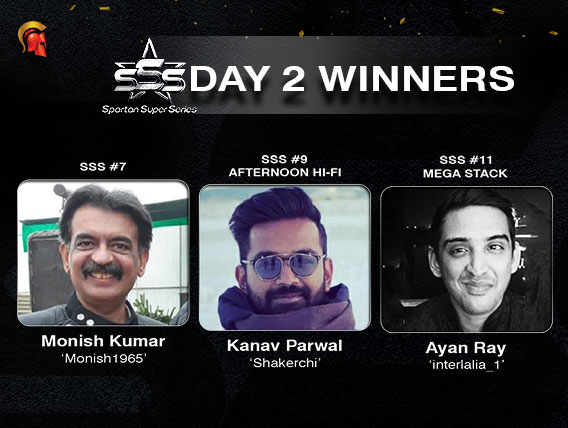 Spartan Poker is back again with another edition of Spartan Value Series (SSS), a week-long tournament promising INR 4.7+ Crores GTD. The series will be running till 17 November with 6 tournaments lining up each day. Yesterday was Day 2 of the same and another bunch of winners walked out with huge cash prizes! Here is the complete summary of SSS Day 2…

The first tournament on the second day attracted 447 players, each paying a buy-in of INR 330. Powering through this field was Monish Kumar aka ‘Monish1965’ who initiated the day with this win. For over 4 years into poker, Kumar has had several victories so far. Yesterday, the tournament also saw the guarantee being surpassed to create a prize pool of INR 1.34 Lakhs which was later shared among the top 31 places. In Level #33, blinds at 7,000/14,000 ante 1,400, in the final hand, a 3-way deal was made with Kumar carrying the larger stack and triumphing the first event of the day.

As the day progressed, the buy-ins increased. The second tournament enticed 216 players, each entering for INR 2,200 buy-in. The top players received a paycheck of minimum amount of INR 6,782, a share from the prize pool of INR 4,32,000. The most deserving player in contention who battled his way to claim the prize money was ‘Tokio999’. The final hand of the tournament saw a 4-way deal, with ‘Tokio999’ having the larger stack was declared the ultimate winner.

A lesser buy-in of INR 1,100 in the Afternoon Hi-Fi tournament, 300 players entered the tournament and 24 top places received a payout for a min-cash of INR 3,000. It was Kanav Parwal aka ‘Shakerchi’ who won the event after defeating ‘Rounder87’ in heads-up. Parwal is an emerging player in the online circuit and was also witnessed in the recent BPT and WPT Main Events in Goa. The final hand of the tournament saw both players playing slow while the board ran 3c 9c 4d 6h Qd, Parwal (Kd 7d) holding high card King shipped the tournament while the opponent showed nothing but J5.

The day progressed with the fourth tournament which attracted 236 players entering for a buy-in of INR 880. The guarantee slightly surpassed to create a prize pool of INR 1.88 Lakhs. The top 17 places were paid for a min-cash of INR 2,964. Topping the field was ‘Rabdasuar’ who bagged the first-place prize money.

In Level #38, blinds at 8,000/16,000 ante 1,000, ‘Rabdasuar’ (6c 5s) enters with 1.78 million chips against his opponent ‘yo yo guitarist’ (9s 9c) with 237k chips. Flop 7c 4d 8c, the former slow plays, and checks while the latter put his entire stack in the middle and gets a call of 220k from ‘Rabdasuar’. Ah and 8d on the turn and river respectively, ‘Rabdasuar’ triumphed the evening after showing his straight cards over the opponent’s two pairs of Nines and Eights.

Spartan’s featured tournament, Mega Stack is scheduled to take place every Tuesday night. A massive number of 807 players entered the late-night event for a buy-in of INR 3,300. Outlasting the field was the well-known online grinder Ayan Ray aka ‘interlalia_1’ who beat Kartik Ved aka ‘TheInternetKid’ in heads-up battle with his pair of Kings against Ved’s high card Ace.

The second day of SSS ended with Hi-Fi being the last tournament. Yesterday attracted a total number of 577 players, each chipping in INR 1,650 buy-in. Powering through this massive field was ‘mumbaifish’ who beat ‘gogobhai’ in heads-up to walk away with an enormous sum of prize money and adding a valuable title to his poker career.