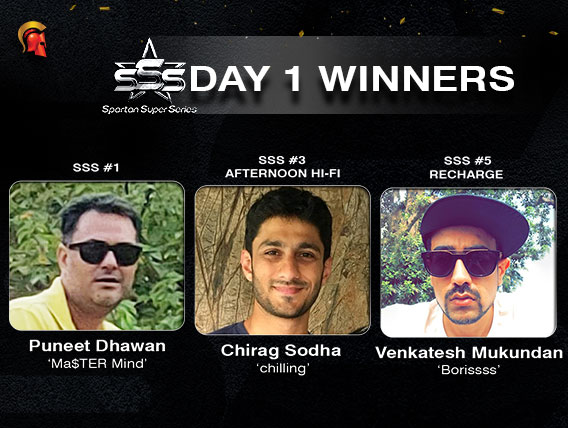 Another edition of Spartan Super Series (SSS) is back on Spartan Poker lining up 42 tournaments spread across the entire week. Currently underway, the series will run till 17 November with a guarantee of 4.7+ Crores. The last edition saw numerous players beginning their poker journey as Spartan gives a pathway to these mid/high stakes players to enter and win big. Here is a complete summary of SSS Day 1…

The first tournament of the day attracted a massive number of 536 entries, each player registered for a buy-in of INR 220. The top 39 places received a share from the prize pool with a min-cash INR 739. The winner of the initial tournament was Puneet Dhawan aka ‘Ma$TER Mind’ who added another win to his poker career after beating ‘Rajku007’ in the heads-up battle. Dhawan is quite known for his wins on previous SSS editions as well.

The Afternoon Showdown saw a field of 255 entries, each paying INR 2,200 buy-in. The guarantee was surpassed creating a prize pool of INR 5,10,000. Taking away the biggest chunk was ‘Kareem Lala’ who beat online grinder Pranjal Gandhi aka ‘lillmessipranjal’ to add a valuable amount to his poker bankroll. Prior to the end, the top 20 places received a paycheck of the minimum amount INR 6,834.

In Level #38 (9,000/18,000 ante 2,250), both players enter the final hand of the tournament. ‘Kareem Lala’ (As Qc) carrying 1.4 million chips against his opponent Gandhi (2d 2s) with 481k chips. Gandhi puts his entire stack in the middle and gets a call from his opponent. The board runs 3c 3d 7c Ac 8d, ‘Kareem Lala’ holding a higher two pair of Aces and threes against Gandhi’s two pair of threes and twos, takes away the limelight of the night.

Now, who wouldn’t know Chirag Sodha playing under the username ‘chilling’, an active player and well-known online crusher who walked away with an ambitious sum of prize money after defeating ‘kidpokerNJ’ in heads-up yesterday. 321 players registered themselves in the Afternoon Hi-Fi for a buy-in of INR 1,100. The guarantee slightly passed drawing a prize pool of INR 3,21,000 which was later shared among the top 24 places with each receiving a min-cash of INR 3,210. Sodha has various records attached to his name and is counted among the leading players on the online felts.

With a buy-in of INR 660, the tournament recorded 353 players taking their seats. The guarantee slightly surpassed to create a prize pool of INR 2,11,800 that was seen to be distributed among the top 27 places for a min-cash of INR 2,118. Powering through the field and claiming the day was ‘KingAA’ who emerged victoriously after sending ‘unruhmlich’ out in the runner-up position. The final hand of the tournament saw ‘GochujanG’ busting in third place and a heads-up deal followed, with ‘KingAA’ carrying the larger stack and triumphing the evening.

ReCharge is a featured tournament scheduled for each Monday. And yesterday registered a massive number of 738 players, each chipping in INR 2,200 buy-in. Monday night gave Venkatesh Mukundan aka ‘Borissss’ a back-to-back win after triumphing Sunday SuperStack the night before. Mukundan is an emerging player and well-known for his online finishes. Mukundan defeated ‘Yerry Mina’ in heads-up, adding a feather to his poker cap. For more information click here.

The day ended with the last event being Hi-Fi INR 8 Lakhs GTD. The final event attracted a total of 513 players, each entering for a buy-in of INR 1,650. The prize pool was shared among the top 45 places receiving a min-cash of INR 4,400. Claiming this day was Sachin Raj aka ‘Hell’ who defeated ‘pokerlust’ in the heads-up.

In Level #47, blinds at 30,000/60,000 ante 7,500, both players enter the final hand. Raj (8h Ac) with 2.3 million chips was up against his opponent ‘pokerlust’ (6h Kh) with 1.4 million chips. Pre-flop, the latter goes all-in, gets a call and the board opens 5s Jc Jd 8d 8s. The river card completed a full house for Raj over his opponent’s Jacks and Eights which he hit on the board, adding a valuable amount to his poker bankroll and sending ‘pokerlust’ to the runner-up position.

For the latest updates on the casino industry and live tournaments around the world, keep reading GutshotMagazine.com and stay tuned!