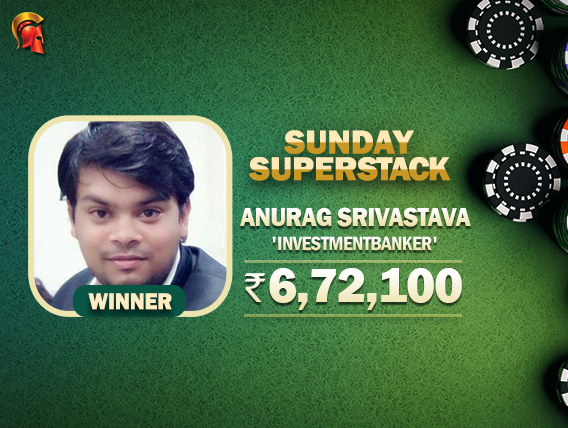 
It was yet another action-packed Sunday on Spartan Poker, where the Sunday SuperStack was hosted, Spartan’s biggest feature tournament of the week, along with 5 For 5, one of its signature monthly tournaments. Both attracted decent turnouts, Sunday being a day-off, and they went into the books successfully.

Sunday SuperStack INR 25 Lakhs GTD began at 7.30 pm last evening and was concluded by 2.06 am this morning. The buy-in of INR 5.5k attracted 517 entries (including 89 re-entries and 178 re-buys). The player to overcome the field was online regular Anurag Srivastava aka ‘InvestmentBanker’ who earned INR 6,72,100 for his efforts.

The final hand of the tournament saw Srivastava with over a 5:1 chip lead. Mishra raised all-in before the flop itself, holding Qd Qs. Srivastava called with Js Ah. The board of 9c 2d Ac 9s 7h gave two pairs for Srivastava and it was enough to beat Queens. Mishra settled for INR 4,13,600 as runner-up cash prize soon after.

Anurag Srivastava’s record is commendable and boasts a lot of title wins and deep runs in various tournaments across all leading platforms in India. Just on Spartan, he has won Flash and the Mega Stack, that too on multiple occasions. He recently won PokerBaazi BSS Superstack last month too. On Adda52, he has won the Millions title as well. This goes to show how consistent he has been in recent months, and he’ll be looking to continue this trend for the rest of the year.

India’s first WSOP bracelet winner Aditya Sushant aka ‘SuperuSer’ was also in the running and finished in the money at 11th place for INR 25,850. He has done amazing on live felts recently and even finished in the money in the recent 2019 Aussie Millions Main Event. Keep reading GutshotMagazine.com for more such tournament roundups, results as well as for general poker news from around the world.