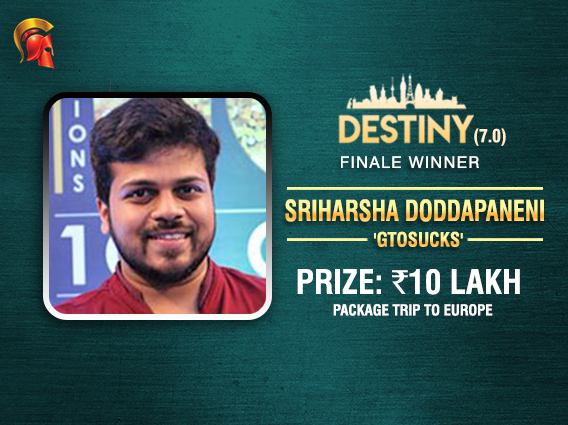 
After winning the third Destiny 7.0 tournament in November 2018, ‘GTOsucks’ had promised to reveal himself if he wins the Finale SnG on The Spartan Poker. Finally, after more than two months of dedicated preparation and perseverance, the ace grinder Sriharsha Doddapaneni playing under the puzzling moniker has shipped the Destiny 7.0 SnG and bagged the much sought-after INR 10 Lakhs package to Europe.

What’s more impressive is that he was the Destiny 1.0 SnG winner back in August 2017 and had won an INR 10 Lakhs package to play in the poker capital of the world – Las Vegas. This was just the start of a magnificent journey in online and live poker.

Talking about his previous online/live victories would be a bit redundant, since the man needs absolutely no introduction in the poker circles. However, for the sake of any newcomers into the community, read about what Doddapaneni has achieved in his career previously, as it will surely inspire these young entrants.

Among his live victories, he won the DPT Colossus INR 200k SHR in April last year and had earned his career best live cash of INR 28.7 Lakhs then. Just a month later, he won Adda52 Big Millions 2.0 for INR 25.5 Lakhs, going wire-to-wire in the Final Table of 8. Along with these staggering achievements, he has also cashed in four 2018 WSOP tournaments and had finished 9th in 2018 APPT Manila HR for PHP 553k (~INR 7.2 Lakhs) in August.

His online record saw him make a hat-trick on Spartan within a week in November last year. He bagged his seat into the Destiny 7.0 SnG first, then won the Elite two days later and topped it off with a Mega Stack win. He earned over INR 11.7 Lakhs from just these three titles that week, not including his wins on other platforms. Everyone would’ve been pulling out their hair wondering who this player is. Finally, the day has come and the revelation has been done.

Coming back to last night’s SnG, he was pitted against some of the top players in the circuit. All of his 9 opponents were very good players and Doddapaneni would’ve witnessed tough fight from all. Regulars like Jayjit Ray, Rajat Sharma, Ratul Steves, Aniket Waghmare, last night’s Spartan Sunday SuperStack winner Aditya Chaudhary and Nishaanth Shanmugahsundaram were all aiming for the kill-shot. Ultimately, Doddapaneni overcame this talented table after playing for over 4 hours, starting 8 pm to 12.08 am, to ship the SnG. The champion, Doddapaneni is looking forward to showcasing some high adrenaline poker in Europe and it can be safely said that he will make deep runs and emerge with flying colours.

Destiny 8.0 has the same INR 10 Lakhs Europe package and will host its Finale SnG on 3rd April, 2019. Keep reading GutshotMagazine.com for similar tournament updates and round-ups as well as for regula poker news updates from around the world.