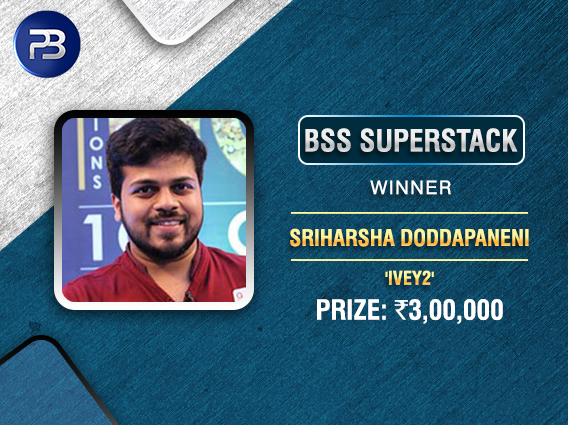 We all know about Sriharsha Doddapaneni, an Indian poker player who has accumulated plenty of victories and accomplishments in poker, both live and online. The player has cashes in Indian live poker tournaments as well as in popular locations like Las Vegas and Manila.

His biggest career victory came in April this year when he shipped the DPT Super Highroller in Goa for a whopping INR 28 lakh cash prize, followed by another massive victory the very next month, winning Adda52’s Big Millions 2.0, which was a mix of online as well as live play, where he won INR 25.5 lakh. Mind you, he also cashed out in the WSOP Main Event earlier this year in Vegas.

So big wins aren’t something new to this player, who added another trophy to his cabinet last night, this time winning an online tournament. He plays on PokerBaazi under the name ‘Ivey2’ and yesterday, he took down one of their most popular featured tournaments – BSS SuperStack INR 15 lakh GTD.

The tournament takes place every Sunday night at 7pm with a buy-in of INR 5,500. Yesterday, a total field of 259 entries (including 80 re-entries) joined the tournament and from them, the top 31 players eventually finished in the money, with a minimum cash prize of INR 15,000.

Sriharsha was brilliant on the night, outlasting every other entry to ship the tournament and take home INR 3,00,000 in prize money, making another big addition to his poker bankroll. He continued what has been a good run in online poker in the last week or so, having finished 2nd in Adda52’s Godfather just a few days back.

Yesterday’s tournament was a grind of over 6 hours, ending at 1:46am when Sriharsha beat ‘Yogiraj’ in heads-up. This player wouldn’t have been too disappointed either, taking away a prize of INR 2,21,250 for finishing second. Some other known names who finished in the money include Aniket Waghmare aka ‘Anteman’ (7th – INR 48k) and Vinay Choudhry aka ‘Lovecee’ (8th – INR 37k).

Gutshot caught up with Sriharsha after he won this tournament and he said, “I am due these wins. I had a huge chip lead for most of the time and played aggressively as I had more than 50% of chips when 7 players were left. I’m happy with the way I am playing and it’s nice to round off an amazing week with this win.”

For more updates on big poker wins in India and around the world, keep reading GutshotMagazine.com.

Don’t have an account on PokerBaazi? You can check out their review page here and then, if you wish to play and become a big winner of their massive tournaments and promotions, sign-up HERE.