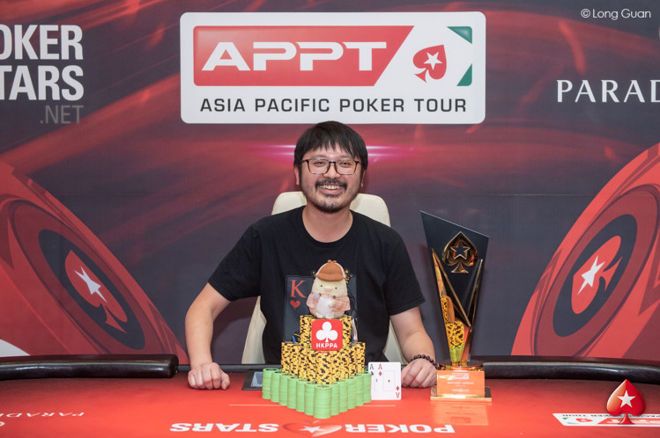 
The 2019 PokerStars APPT Korea series is all in the books. The series started off at Paradise City Casino in the city of Incheon in South Korea on 5th April, and while there were a slew of tournaments in the schedule, the Main Event remained the highlight of the festival.

The KRW 1.8 million Main Event saw 2 starting flights, all being conducted on consecutive days. Day 1A and Day 1B together gathered a 581-entry field, out of which only 153 players progressed to Day 2 and leading them all was Russia’s Konstantin Pogodin. Natural8 Pro Michael Soyza was also in the field and was among top stacks on Day 1A but was railed at 20th place for KRW 6,400,000 (~INR 3.91 Lakhs).

Though, on the final day where the whittled-down field of 9 were contesting for the kill-shot, it was Hong Kong’s Sparrow Cheung who denied them all the title and took home the prestigious APPT trophy and as a result, became KRW 198,100,000 (~INR 1.21 Crore) richer.

Cheung is so well accomplished in the scene that he even broke the world record in 2017 for the most cashes in a single year, from 67 ITM finishes. He has over $1.6 million total live earnings till now and is in top form for the upcoming poker season, which also includes the gem of the year, the 50th World Series of Poker (WSOP).

Cheung started the final day with a below average chip stack.  He was the short-stacked on the FT too. Halfway through the FT play, he doubled up with Aces against Tetsuro Tomita’s Ace–king. From that point on, his entire play was an adventure of sorts, touching ground zero a few times before bagging victory, beating Japan’s Tomomitsu Ono in heads-up.

Cheung commented after his win, “This is my tenth year playing PokerStars tournaments and this is the first Main Event title for me… I was excited just to make the final table because in 2017 I finished in 11th or 12th, I forget which, after running queens into aces and I was so sad, so this time, just getting to the final table I was already very happy.”