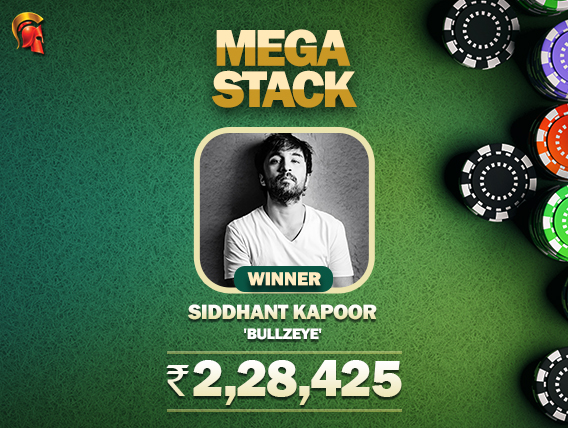 A juicy INR 12 Lakhs was on offer last evening at Tuesday’s Mega Stack tournament at The Spartan Poker and the man who claimed the biggest chunch of the prizepool was Mumbai’s Siddhant Kapoor who plays online as ‘bullzeye’. Kapoor, who is an actor and DJ, is a passionate poker player with several deep runs and titles and last night’s win added INR 2,28,425 to his poker bankroll.

A total of 328 entries came together to take the Mega Stack prizepool up to INR 14.84 Lakhs well past its original guarantee. It was a little after 1:30 am when the final hand of the tournament was played with four players still in the mix – ‘shipsuperior’ (3.8 million in chips), ‘chicky’ (1.2 million), Kartik ‘TheInternetKid’ Ved with 816k and bullzeye just a shade ahead with 3.9 million chips.

With blinds at 35,000-70,000-8,750, the first two players folded while TheInternetKid and bullzeye got into it headsup. TheInternetKid with 7h 6h moved all-in and was called by bullzeye holding 8h Ah. The board of Qh Ts 2c Jh 3d didn’t favour the short stack and bullzeye’s Ace high was good enough to win that hand eliminating TheInternetKid in the process.

The remaining players then did an ICM deal giving Siddhant Kapoor the biggest share of the prizepool and the title of Mega Stack. “I had a good experience playing the Mega Stack and it’s always nice to score a win. I actually played more than half the tournament on my mobile,” said Kapoor laughingly when we spoke to him. He’s got no immediate plans in poker other than playing when he has the time, “… although in the future, I would like to take it up professionally if I get the chance.”

Check out an earlier interview with Kapoor after a big win on Spartan. Follow our daily updates of poker news from the live and virtual felts right here at GutshotMagazine.com