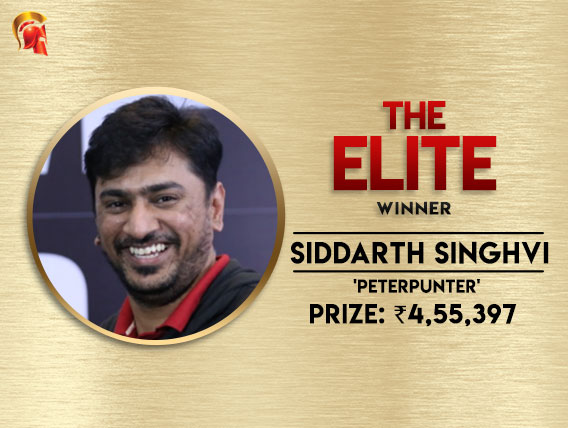 
Siddarth Singhvi made headlines recently when he bagged the chance to play with acclaimed poker pro and celebrity Patrik Antonius on his maiden visit to Goa, India for the 10th anniversary celebrations of Deltin Group. Singhvi had won a Max Hands Play Contest on Adda52 and finished 1st on the leaderboard to earn the game with Antonius.

Singhvi is a well-known player who plays online and has wins on all leading platforms. He is also a live enthusiast and has many cashes from major live tournaments. Last night, he shipped The Spartan Poker’s feature tournament, The Elite INR 18 Lakhs GTD for an awesome 1st place cash prize of INR 4,55,397, playing under ‘PeterPunter’.

The Elite began at 9 pm last night on Spartan and was in the books by 4.45 am today morning, a long and tiring grind indeed. The buy-in was set at INR 11,000 and attracted a playing field of 224 entries (including 40 re-entries and 64 re-buys). The guarantee was crushed by a huge margin and the final prize pool came to a colossal INR 22.4 Lakhs!

Singhvi overcame the strong field, playing almost 8 hours of continuous poker to ship this prestigious tournament on Spartan yesterday. Singhvi made a heads-up deal with the runner-up, who is a regular name on Spartan, ‘Lord Hendrix’. The deal saw Lord Hendrix also take home a decent amount of INR 4,18,202.

Singhvi’s record is so impressive that it looks like a shipping yard, a few victories here, a few deep runs there. 2018 itself has seen him win more than 10 major online titles. In August 2018’s SSS on Spartan, he made a record three title wins, Elite, Triple Bubble and DareDevil. He then proceeded to win major titles on Adda52 like Roar and Millions.

He even topped the Ace Race leaderboard on Adda52, not once but twice, and topping a leaderboard shows how skilled and consistent he is in his performances. Coming to his live wins, he recently concluded 2018 WPT India by shipping the Megastack Turbo NLHE for INR 5.71 Lakhs on the last day. The Elite win will add another wholesome amount to his bankroll. We spoke to Singhvi after his win and he said, “I made a deep run in the recent IOPC Elite and was close to shipping it. I’m glad to have won it this time around.”

Keep reading GutshotMagazine.com for more such Indian tournament roundups, results as well as for general poker news from around the world.