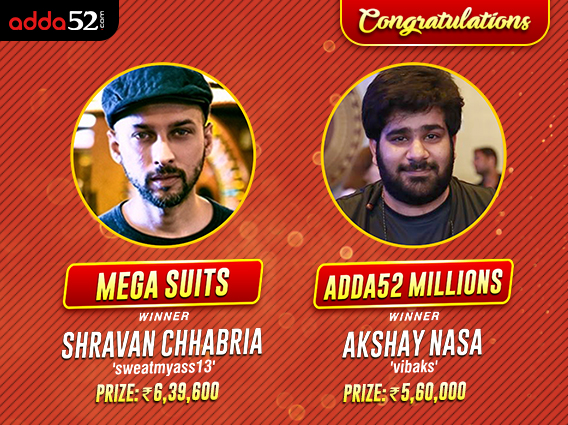 Shravan Chhabria has a habit of winning big online poker titles every once in a while, regardless of which platform he plays on. Yesterday however, he outdid himself, making deep runs in two of the highest value tournaments on Adda52, shipping one and narrowly missing the title in the other. While he took down Mega Suits, it was Akshay Nasa who emerged victorious in the Adda52 Millions. Take a look at our summary of this Adda52 Sunday…

This happens to be Adda52’s largest weekly tournament and Shravan Chhabria was on top of his game on the night, good enough to take down the title and beat all of the other top pros in contention. Beginning at 5pm last evening, the tournament had a buy-in of INR 5,500 and lasted a little over 9 hours to end at 2:05am this morning. 533 entries meant the guarantee was passed and the INR 26.6+ Lakh prize pool was shared by the top 55 places with a min-cash of INR 11,993.

The FT was more-or-less softer than the overall field and Chhabria managed to slay all his opponents on Adda52 last night, where he plays as ‘sweatmyass13’. He pocketed a major prize of INR 6,39,600 after beating ‘troublesome’ in heads-up, who won INR 3,73,100 for finishing second. Talking about his day in poker Chhabria said, “Thanks a lot. It feels great to have closed one and finished runner up in the Millions… Couldn’t have asked for a better Sunday.”

These two tournaments run simultaneously, with the Millions beginning at couple of hours later at 8pm. However, this one has a little higher buy-in of INR 11,000 attached to it and with 193 entries participating, we missed the guarantee ever so slightly. Eventually, the top 19 places were paid out a minimum of INR 20,000 each, and Chhabria managed to make yet another deep run.

Here, he finished second to Akshay Nasa aka ‘vibaks’ after an 8-hour grind that ended at 4:03am this morning. It would’ve been one hell of an achievement if he managed to complete the double on Adda52 last night. However, let’s not take anything away from the winner, who bagged a massive bankroll addition of INR 5,60,000 for finishing first, while Chhabria banked INR 3,36,000 as runner-up prize.

Nasa is among the top online pros in India and his poker CV is an extremely impressive one, and this wasn’t even the first time he won the Adda52 Millions title. Others to rank in the money last night included Adda52 Team Pro Kunal Patni (19th), Kanishka Samant (14th), Rajat Sharma (9th), Tarun Goyal (7th), Siddarth Singhvi (6th), and Vinay B (4th).

For more updates on Adda52 featured tournaments and other major poker tournaments from across the globe, keep following GutshotMagazine.com.