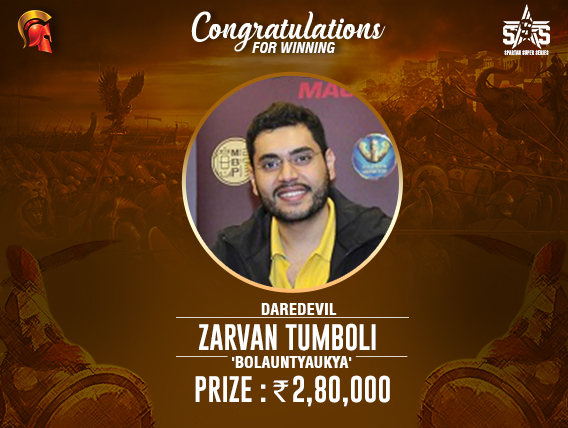 
At the start of this latest edition of the Spartan Super Series (SSS), Gutshot got in touch with Mumbai’s Zarvan Tumboli, who was among the title winners on SSS Day 1. He told us how he intended on grinding through the series and even chasing the SSS Leaderboard, something he hasn’t ever done before.

So far, the player has kept up to his promise, shipping another title last night, on Day 4 of the series on Spartan Poker. Playing under the screen name ‘BolAuntyAuKya’, Tumboli managed his second title of the series yesterday, shipping SSS Event #20 Daredevil INR 10 Lakh GTD.

It was the biggest tournament of the night and 121 players registered along with 244 re-buys, as the tournament allows a 50% discount on all re-buys. Eventually, it was only the top 15 players who were paid out from this field, each getting paid a minimum of INR 19,000.

From them, we saw two highly talented players in Tumboli and Shravan Chhabria aka ‘D.Trump04’ engaging in the heads-up battle. It was a well-contested tournament and the final hand was among one of the best, as Tumboli decided to slow play his Queens, even though he completed a set on the Qs 9h Ts flop.

He checked and called Chhabria’s 140k bet, who held Jd 7c. The action only got better on the Kh turn, with Chhabria going ahead with a King-high straight. Once again, Tumboli checked, Chhabria bet 210k and got a call. The 9c on the river saw Tumboli complete a full house, shoving all-in an receiving a call from his opponent, who would’ve been disappointed to lose with a straight.

With this, Tumboli banked another top prize of INR 2,80,000 while Chhabria took away a decent prize of INR 1,82,500 for his runner-up finish. Tumboli has strengthened his chances of winning the SSS Leaderboard and you can keep reading GutshotMagazine.com for all updates on this series on Spartan.