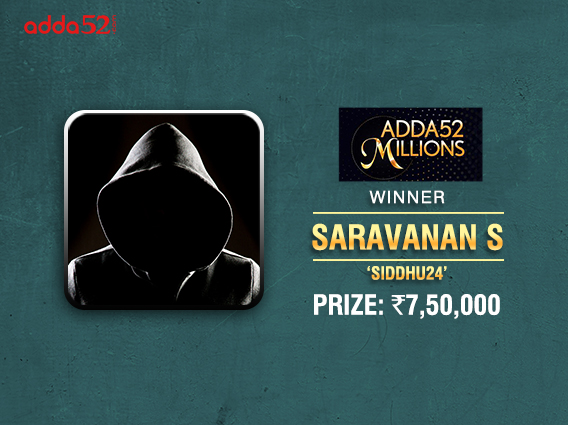 Most of the top poker companies in India host their biggest tournaments on Sundays and other public holidays, to ensure maximum participation from around the country. Similarly, the Adda52 Millions tournament is hosted by Adda52 every Sunday at 8pm IST, with an INR 20 lakh guaranteed prize pool.

This weekend’s Millions tournament saw a handsome participation of 219 entries. With a buy-in of INR 11,000, the guarantee was beaten, and a new prize pool of INR 21.9 lakh was generated, which was to be shared among the top 15 finishers. Unfortunately, ‘badtameez_donk’ became the bubble player, finishing in 16th place.

Coming out on top of this field and shipping this prestigious tournament on Adda52 was Saravanan S aka ‘SIDDHU24’, who won the guaranteed first-place prize of INR 7.5 lakh. He would’ve been very delighted with this win, after having beaten some well-known players throughout the tournament.

In what turned out to be the final hand, Saravanan raised to 90,000 holding pocket Tens, and ‘hashstack’ moved all-in for 21,47,680 having Ac 3h. Saravanan made the call and the board opened 2s 7h 6c 5d Jd, not letting either player improve their hands. Saravanan thus won the title with his pair of Tens, to go with the massive top prize of INR 7,50,000! Tarun Agarwal, Vinay B and Anish Patra were other regs who finished in the money but didn’t make it to the 6-handed final table.

Don’t have an account on Adda52 as yet? You can join their platform and be the next big winner of the Adda52 Millions tournament, or any of their other top tournaments. To do so, sign-up HERE.