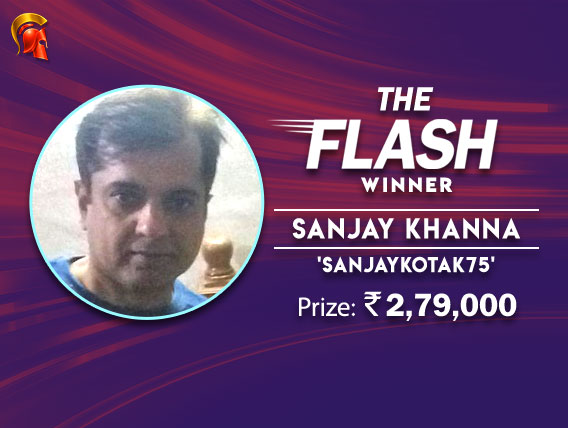 
Spartan Poker’s The Flash INR 12 Lakhs GTD, the Thursday feature tournament, was hosted yesterday between 7.30 pm and 1.06 am. The tournament is one of the ever-popular ones in the community and attracts a decent turnout every time it’s hosted.

Yesterday’s Flash attracted a total of 285 entries (37 re-entries and 111 re-buys) from around the country. They each paid up the INR 4.4k buy-in to compete in the event. Top 23 places were only paid out of the prize pool and taking home the biggest prize was Sanjay Khanna aka ‘sanjaykotak75’ who earned INR 2,79,000 as first-place cash prize.

Khanna beat well-known budding player Nadeem Basha aka ‘pokerbill’ in heads-up to bag his title. Basha settled for INR 1,89,000 as second-place cash prize. In the fateful final hand of the tournament, Khanna had already bagged the chip lead, although by not a great margin. Basha shoved pre-flop with Ac 4c which he obviously found to be worth shoving. Khanna called with Nines.

The board showed 8s 6s 4s 8d Kc and gave Basha Fours on the flop, but Khanna’s two pairs, Nines in hand and Eights on the board were enough for him to ship the whole tournament along with the massive cash prize.

Keep reading GutshotMagazine.com for more such tournament updates, roundups and general poker news from around the world.