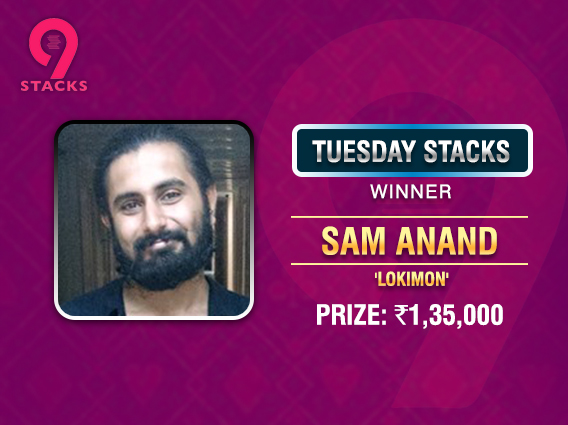 
Among the growing companies in the Indian online poker scene, 9stacks is one that definitely ranks in the tops on that list. The platform has been hosting plenty exciting tournaments and events leading up to 2019, and the new year has also seen them host some tournaments which have become popular among the masses.

The tournament had begun at their usual 8 pm routine, which was part of their ‘Prime Time @ 8’ promotion. For a buy-in of INR 3,300, the tournament attracted a decent field of 118 entries (including 38 re-buys).

Anand took down the title at exactly 2.02 am today morning, playing for over 6 hours continuously. He took home a good 27% chunk of the prize pool, beating ‘MoneyHeist’ in heads-up, who had to settle for INR 95k.

Anand is a known circuit player and is popular among his peers. He plays online quite frequently and has cashes from all reputed platforms. He has even bagged Spartan’s Sunday feature tournament title – Big Daddy – back in July 2018. The player, with the welcome cash earned from 9stacks, will be looking to win a few more events along his way and add to his record.

Top 15 places were paid on 9stacks in the event, among which the knowns were previous Spartan Millionaire winner Nikhil Ramesh aka ‘rn275‘ (3rd – INR 70k), Arsh Grover aka ‘BigggTymeR’ (4th – INR 50k) and Destiny 7.0 Finale SnG winner Sriharsha Doddapaneni aka ‘G.O.A.T’ (13th – INR 7k). A lot of the regulars and well-known pros were left out of the money and Anand would’ve been satisfied after overcoming such a good field.