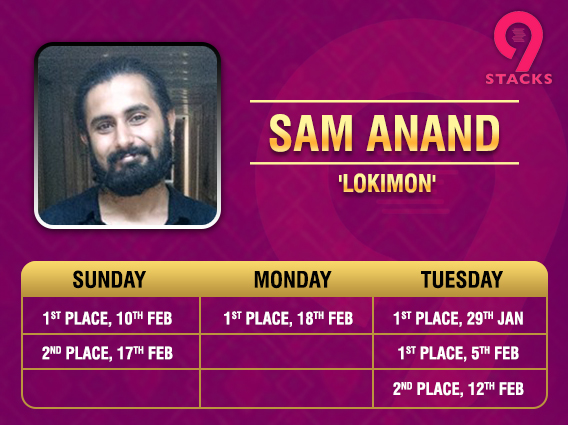 Sam Anand on the run of a lifetime on 9stacks


Sam Anand is one player who has been making major headlines in recent time on the virtual felts. He not only went on to register back-to-back wins in Tuesday Stacks on 9stacks, one of the up and coming poker platforms in India, but also finished runner-up in the following one, narrowly missing out on the hat-trick.

As if this wasn’t enough, Anand even won the biggest tournament of the week on 9stacks, the Sunday Stacks INR 15 Lakhs last week for INR 3,30,000. Coming to this week’s Sunday Stacks of 17th Feb, the winner to emerge was ‘effuno’, but Anand continued his hot run here too, finishing came 2nd in the race for INR 2,62,500.

Average players like us would be immensely satisfied with this red-hot streak and would’ve taken it easy, but this guy just wasn’t satisfied, going onto the next level and taking home yesterday’s Monday Stacks title as well, for INR 1,25,000, beating ‘Mooglu3’ in heads-up.

With this phenomenal run in recent times, Anand has received much praise and acknowledgement form his peers in the community. He has taken the limelight instantly with this and will be looking to continue this trend on 9stacks. In his road to multiple victories on 9stacks, he has beaten acclaimed grinders like Sriharsha Doddapaneni, Neel Joshi, Anirban Das, Rubin Labroo, Sahil Mahboobani, Goonjan Mall, and others.

Anand was already a known entity in the community but this recent run on 9stacks has increased his reputation majorly. He has a great number of titles and deep runs to his name from previous tournaments. He has even won Big Daddy on Spartan and an INR 30k Goa trip, in addition to the cash prize, to play in the Big Daddy poker room.

Here’s the man himself talking about his staggering achievements in the last month. “I’m grateful to have the opportunity to be playing a really fun strategy game to a competitive extent and do well. And of course to an innumerable number of people without whom it wouldn’t have been imaginable.”

He played 81 multi-table tournaments (MTTs) in the last month, including 7 PLOs, and cashed in 26 of them, while shipping 6 titles among them. He spent around INR 4.95 Lakhs for buy-ins in these tournaments and converted it to INR 13.57 Lakhs in winnings. Among the 7 PLO MTTs, Anand cashed in 4 and shipped one. He made INR 2.1 Lakhs in just these PLO ones, having bought into them for just INR 45,650.

This is the mark of an extremely talented player. Anyone with a basic knowledge of poker rules can win once or twice in MTTs, but it takes extraordinary amount of dedication and enthusiasm to make such an awesome run. Anand has sharpened his mind to the extreme, which is what is required to ace this mind sport. We all know that a true poker aficionado never stops winning, and Anand being one, will be hoping to win a few more tournaments on 9stacks and other platforms as well.

Keep reading GutshotMagazine.com for more such articles as well as for other poker news coming from all corners of the world.