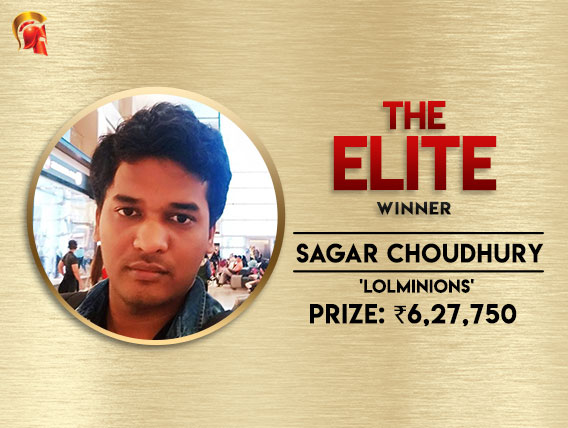 
Spartan Poker, home to some of the biggest tournaments ever hosted like The Millionaire, IOPC Main Event, IOPC SHR, etc. also hosts a weekly feature tournament every Friday called The Elite. The tournament is one of the high-stakes tournaments hosted on their platform and always attracts top talents and regs from across India.

Yesterday’s The Elite 6-Max INR 18 Lakhs GTD was nothing different. The tournament attracted a total of 270 entries (including 54 re-entries and 94 re-buys). The guarantee was crushed, and the resulting prize pool came to a grand INR 27,00,000, with each entry coughing up the INR 11,000 buy-in.

The top 23 places were paid in the event and emerging victorious after a tiresome grind of over 7 hours (9 pm – 4.06 am) was Sagar Choudhury aka ‘lolMinions’ taking away a colossal pay-day of INR 6,27,750 for his efforts. He beat ‘madoverchoppot’ to claim his victory on Spartan. The latter settled for INR 4,25,250 as second-place cash prize.

The last hand of the heads-up match saw Choudhury already with huge skyscrapers as stacks. He had accumulated almost 6:1 chip lead and was just a hand away from the title win. On the flop of Qd 6s 4d, madoverchoppot bet 36k and received a call, having previously raised to 27k pre-flop with 5s 8s.The turn of As saw madoverchoppot again bet 128k, and Choudhury called too, making Aces with Ad 2d. The river of Th fired blanks for madoverchoppot but he bluffed and shoved. Choudhury called and subsequently won with Aces over Ace-high.

Choudhury has seen plenty of wins and deep runs till now. Among his notable achievements are winning Summit on PokerBaazi last September followed by Spartan DareDevil win in October, an SSS title win in November and this year’s PokerBaazi Bout win in January. He will be looking to make the best use of this good pay-check, to convert into more winnings in upcoming events.

Triple Bubble, the other big event on the day on Spartan, was also concluded and the winner turned out to be ‘EasyMoneySniper77’, who also finished 20th in the Elite. Keep reading GutshotMagazine.com for more such daily tournament roundups and for general poker news from around the world.