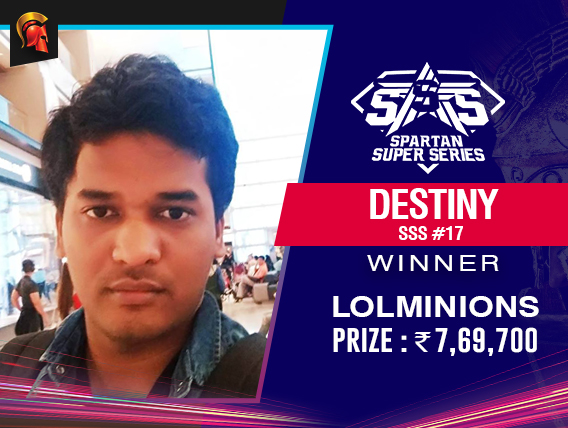 
Another Wednesday, another Destiny tournament on Spartan Poker. And guess what? Another victory for Sagar Choudhury, regular online grinder who goes by the name ‘lolMinions’ on the platform. Last night would’ve been a more special victory than the rest of his wins, considering it was a part of the ongoing Spartan Super Series (SSS), while also being the festive occasion of Holi in India.

Choudhury completed this win and didn’t just take away a massive top prize, but he also booked a seat into the Destiny Finale SnG, becoming the ninth person to do so in Destiny 8.0. INR 1 Lakh will be deducted from his total winnings last night, as an entry to this Finale, which takes place on 3rd April. If he wins that too, he receives an INR 10 Lakh package trip to Europe from Spartan!

Choudhury is always a top contender in Spartan featured tournaments and winning the Destiny is even more special as it attracts some of the toughest competition from across India. Yesterday too, 592 entries were recorded which passed the guarantee pretty easily, generating a new prize pool of INR 29+ Lakh.

This was eventually shared among the top 50 players who each received a pay-out of INR 14,800. Some of the top players from this field reached the end of the tournament and Choudhury himself had a pretty strong heads-up competitor in Pulkit Goyal aka ‘Championplayer’, who is also a past IOPC Leaderboard winner.

By the time we reached the final hand, Choudhury had gained a chip lead of over 3:1 in Level #46, with the blinds at 46,000/92,000-11,500. Here, Pulkit shoved all-in on the turn with the hope of completing his nut flush. However, he only managed to hit a pair of Kings on the board, while Choudhury won with Kings and Twos.

This isn’t the first time Choudhury ended with an SSS title and we’re pretty sure it won’t be the last time. A few days still remain in this edition of the cash-rich series on Spartan and you can get all updates on the same here on GutshotMagazine.com.

Don’t have an account on Spartan Poker? Check out their review page here, and don’t miss out on their bonuses