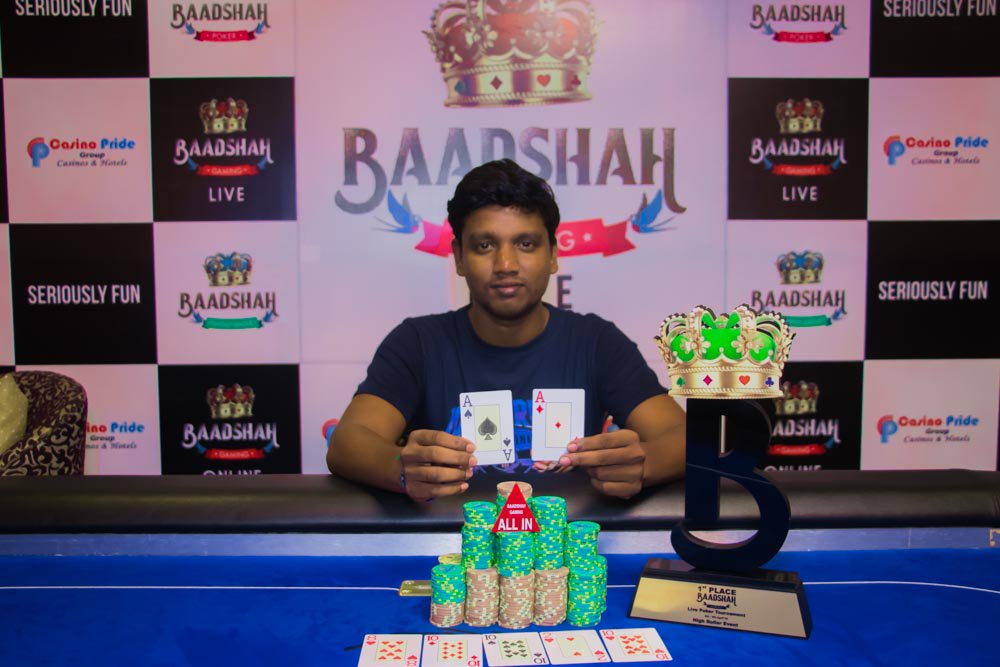 The Baadshah Gaming Live tournament series came back for its second series, after a successful one in December last year, and some of the best poker players from around the country flew in to be a part of the action at Casino Pride in Goa. The series is now over and we’re bringing to you a roundup of the INR 75k buy-in High Roller tournament that took place.

The 2-day event began on 8th April and it was the highest buy-in event of the series. A small but competitive field of 48 entries was recorded in Baadshah Gaming Live’s first ever High Roller tournament, and S. Saravanan ended victorious in this event, pocketing INR 12.5 lakhs for first place.

The 32-year old from Chennai would’ve been mighty proud of this accomplishment, winning his first ever live tournament title. What would make him even more proud of himself is that he beat big names like Aditya Sushant, Raghav Bansal and Aditya Agarwal, who are undoubtedly the top three poker players in the country at the moment.

Gokul Krishna from Hyderabad reached heads up against S. Saravanan, and the former held close to a 2:1 chip lead. Saravanan played aggressively even though he was behind, and it paid off, slowly equalling and then even taking the lead against Krishna. Finally, his pocket Aces proved to be too good against Krishna’s A-5. The players went all-in and the board helped Saravanan complete a full house (tens full of aces), giving him the title and a prize of INR 12.5 lakh.

Final results (all values in INR):

Prior to this event concluding, Aditya Sushant won the warm up event for INR 3.89 lakh, Vidwath Shetty won the bounty event for INR 1.6 lakh and Australia’s Bobby Zhang won the Baadshah Gaming Live Main Event for INR 17 lakh. Keep reading GutshotMagazine.com for regular updates on poker tournaments from around the world.